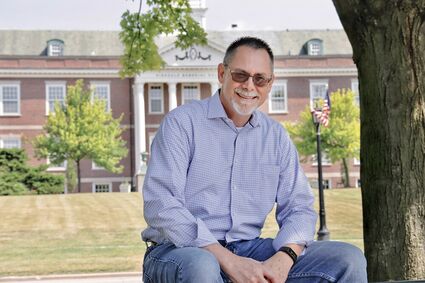 Robb McGinnis, Hinsdale's community development director and building commissioner, has seen a lot during his tenure in the village, from the department handling 120 new home builds his first year in 2006 to the slowdown during the Great Recession. "The fact that I get to do so many different things keeps it interesting," he said of his job. (Jim Slonoff photo)

"You're trying to thread the needle between helping to protect the status quo in a neighborhood and helping the builder and homeowner get the home built," he explained.

McGinnis joined Hinsdale's staff as building commissioner in 2006 and added community development director to his portfolio in 2009. He said his department is responsible for regulating development within the village as well as zoning enforcement and property maintenance.

"We have five full-time and two part-time employees, issue just over 1,000 permits (annually) and average around 4,000 inspections per year," McGinnis said.

Overseen projects include the redevelopment of the old Amlings site, the Hamptons of Hinsdale, the Amita Health Cancer Institute and the Patient Pavilion at Amita Hinsdale Hospital.

"That was a great project. I was out there nearly every day," McGinnis remarked.

But it's rarely a smooth process from start to completion.

"You need to listen more than talk. I have to do a lot of diffusing," he said.

McGinnis, a Western Illinois University grad with a degree in construction technology, draws on his own experience as a builder to guide his work.

"I was a superintendent and a union framer before going to work with my dad building houses in Downers Grove and Woodridge," he related.

A flagging housing market in the early 1990s compelled McGinnis to draft a new blueprint for his career that would ultimately lead to Hinsdale.

He went to work for the city of Des Plaines staff as a plan reviewer, then took a position as a building inspector with the village of Woodridge before coming to Hinsdale.

"Anyone who does what I do should have to spend some time on the private side first, because it helps you understand the intent behind some of the rules and how to find alternatives," he said.

A homeowner may be upset, for example, that a parking pad can't occupy the front yard. But perhaps there's another solution.

"It starts with 'No,' but you try to help people get to 'Yes'," McGinnis said. "I think the demographic that we deal with (in Hinsdale) is highly educated and they understand that the rules are in place for a reason."

He relies heavily on his department staff to shoulder the load.

"The secret to success is to surround yourself with people who know more than you do," he said. "Most of my team has worked on the private side, and that is a large reason why we're able to help them get to 'Yes' as often as we do."

As one of only 42 Master Code Professionals in Illinois, McGinnis commands the respect of those with whom he works. And that respect is mutual.

"You really get to know the residents, the merchants, the builders and the architects," he said. "I like that.

"At the end of the day, maybe I can't solve everyone's problems," he added, "but I've listened to them and tried to look for alternatives. People appreciate that you went the extra mile."