The rat-a-tat-tat and a bright uniform

Hinsdaleans love a parade - and this year's march steps off on Saturday, July 3 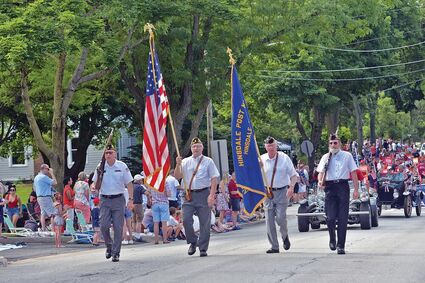 The last Indepen-dence Day parade in Hinsdale was in 2019, as last year's was canceled due to COVID-19. The parade returns this year, stepping off at 10 a.m. Saturday, July 3. (file photo)

The Hinsdale Independence Day Parade is back.

After being canceled last year due to COVID-19, the parade will step off at 10 a.m. Saturday, July 3. And it will look very similar to parades of the past.

"I was a little nervous, but we've had a really good turnout, and I'm excited for some of the new things," said Heather Bereckis, superintendent of parks and recreation for the village. "We actually have almost the same amount of entries we do in a normal parade year."

Some of the bands that come from out of state will not be participating, but Hinsdale Central's marching band will be on hand to entertain the crowd.

"I think that will be really fun and engaging," Bereckis said, noting the village has tried to include the Honey Bears in previous years, but they were always booked.

"With some places not holding parades, they had space for us this year," she said.

Westmont rock band The Manning Bands, popular at that village's Cruisin' Nights, will entertain the crowds from a flatbed.

Residents also will see many familiar faces, including Village President Tom Cauley, fire and police vehicles, the Shriners and supporters of local politicians from the county, state and federal level.

The parade will follow its traditional route, starting at Sixth Street and Garfield Avenue, traveling north to First Street and continuing west to Grant Street before turning south on Grant and ending at Sixth and Grant.

Bereckis said the barriers in front of First Street restaurants between Garfield Avenue and Washington Street won't present any problems for the procession.

"We actually think it might be good," she said. "People will be eating and drinking hopefully at the restaurants, and they will get a front-row seat for it."

Parking will be available in the new deck at First and Garfield, but the upper level will not be available as a spot to watch the parade.

This year's celebration will not include the festival in Burlington Park that has been held in conjunction with previous parades. COVID-19 restrictions were not lifted in time to line up all the necessary vendors for the event.

"We're hoping to have it back next year if people really like it," Bereckis said.

The parade also will be livestreamed for those who are not comfortable being in groups. Visit the village's website at https://www.villageofhinsdale.org.

With July Fourth falling on a Sunday and a number of churches on the parade route, the parade was moved to Saturday.

"It falls on a Sunday once every 11 years and traditionally it's not held on the Sunday," she said.

She has received some positive feedback from residents who can watch the parade before leaving town for the weekend.

"It seems to be working out really well," she said. "We're just excited to have it back."

The end of COVID-19 restrictions last month provided another type of freedom to celebrate this weekend.

An exhibit by the Hinsdale Historical Society, in partnership with the D181 Foundation and Molly Haworth of Little Blue Prints Art Studio, offers a look at what the past year was like for Hinsdaleans.

The exhibit features creative work by Hinsdaleans of all ages, including the District 181 Foundation's Young Writers Book: The 2020 Project Student Reflections on a Pandemic Year. Also on display are works by local artists Megan Arndt, David Marcet, Maureen Claffy and Jimmy McDermott and organizations including The Community House, Hinsdale Central and The Hinsdalean.

Lighting up the night sky

The La Grange Country Club will host a fireworks display at 9:30 p.m. that can be viewed by the public at the park.

This year's fireworks display will be bigger and more festive to celebrate the village of Westmont's 100th anniversary. Activities begin at 4 p.m. and include food trucks, concessions, beer, crafts, games and music. Fireworks start at 9:30 p.m.