The pool is the place to be in summer

Swimming improves fitness, teaches life skills - and it's a fun way to spend a hot day 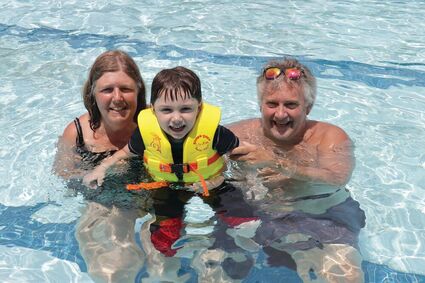 Jean and Karl Meyer of Hinsdale are sharing their love of the water with their 5-year-old grandson, Sterling. As lifelong swimmers themselves, the Meyers know the importance, and the fun, of being comfortable in the water. (Jim Slonoff photo)

There are few days between May and September that don't include at least one trek to the Hinsdale pool for Karl and Jean Meyer.

"We go there for a lot of different reasons," said Karl, not the least of which is to swim laps. "It exercises every muscle in your body," he said, while also being gentle on joints. And it doesn't aggravate Karl's ongoing back issue.

Thanks to indoor pools like the one at their gym in Countryside, the Meyers can enjoy their favorite form of exercise even when the Hinsdale pool is closed for the season. But when the weather permits, they prefer the outdoor pool near home.

"We also just like to go there to lounge on a nice, hot day," Karl said.

Of course, not much lounging takes place on the days when they're accompanied by their 5-year-old grandson, Sterling, who is acquiring his grandparents' love of the water one visit at a time.

Like Sterling, Karl's love of the water began at a very young age. Growing up with a summer cottage on the Fox River, Karl said he can't remember a time when he didn't know how to swim. He went on to become a water safety instructor and a member of a swim team.

"I've got a lot of swimming in my blood," he said.

Like her husband, Jean said she grew up enjoying the water. Once just a fun way to spend a day with friends, she said swimming now is an important part of staying healthy.

"If I'm in the water, I'm moving," she said. But unlike other workouts, a trip to the pool leaves her feeling clean and refreshed, Jean said.

Lessons to last a lifetime

Hinsdale Stingrays coach Brian Powell Jr. also has been swimming for as long as he can remember. He was still a kid himself when, at age 15, he began coaching others to swim competitively.

Swimming is both a skill and a pastime that can last a lifetime, Powell said.

Along with being a great form of exercise for all ages, Powell said swimming has benefits that extend beyond the water, especially for members of a competitive swim team.

Having earned two state championship titles as a member of the Hinsdale Central High School swim team, Powell said competitive swimming taught him discipline, a strong work ethic and the ability to work as part of a team.

Now, he's passing those lessons on to other young people, along with the ability to speed through the water. 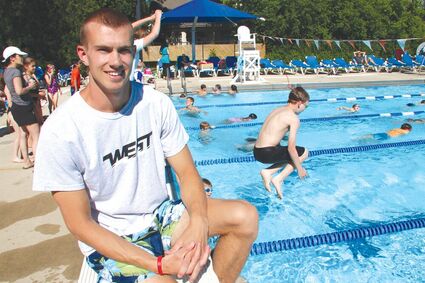 Like many of his fellow coaches, Brian Powell Jr. has been teaching members of the Hinsdale Stingrays Town Team for many summers. "It's just a fun way to do swim team," he said. (file photo)

This year's Stingray swim team will stick close to home as the country continues to recover from the pandemic. Swimmers will participate in a single inner-squad swim meet in lieu of a regular competition season.

But despite the abbreviated schedule, Powell said interest in the team is strong, with 100 to 140 swimmers aged 5 to 16 from Hinsdale and the surrounding communities expected to participate when practices begin in early July.

"They get to meet kids from all over town and the other communities," Powell said, all while staying active, keeping cool and having fun.