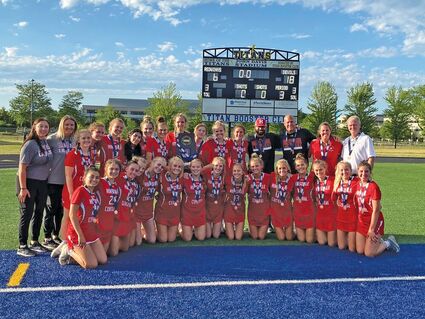 The Hinsdale Central girls lacrosse team celebrates its victory in the IHSA state tournament's third-place game Friday at Glenbrook North High School. The Red Devils staked their claim as one of Illinois' best programs for the third straight year after winning the state title in 2018 and finishing runner-up in 2019. (photo courtesy of Hinsdale Central Athletics)

Varsity head coach Matt McNiff said the team's sights were on a first-place trophy but he was proud of the way the team battled through a challenging year.

"We had discussed a state championship every day, and I think the girls really bought into it," McNiff said. "We accomplished a lot. Given the circumstances and the situation, I think we actually handled everything pretty well."

Those circumstances included the absence of an offseason training regimen until McNiff was officially named head coach shortly before the start of the season as well as limited contact days due to COVID-19 restrictions.

"The beginning of the season was really challenging," said McNiff, who also coaches Central football, and he credited team members for their resilience. "They were the toughest group of athletes I've worked with in my career."

Co-captain and graduated senior Charlotte Callahan said the team was able to overcome a lot of adversity, including having only seven returners with varsity experience.

"Given the cards we were dealt, I was really proud of what we were able to accomplish,' said Callahan, a Yale University recruit.

Solid wins over perennial powers New Trier and Glenbrook South gave the team a head of steam heading in the playoffs.

"We had a lot of momentum," Callahan remarked.

Loyola, however, remained the one opponent that had denied them victory. Facing the Ramblers for a third time in the season was a tough assignment, said co-captain and recent graduate Cayden Torsberg. The team played close the first half before the score tilted Loyola's way in the second.

She expressed pride in her teammates' performance in the state finals.

"We fought hard, and Loyola came out on top," Torsberg remarked. "Third place is still great, and everyone contributed to the win."

McNiff said he saw the team progressively improve in its play against Loyola, who he felt had its best team in years.

"I do feel like we got better each time," he said.

Co-captain and graduated senior Sofija Buzelis, who's moving on to play for Furman University admitted the team was crestfallen after the loss.

"I think everyone was really super down. Right when we stepped onto the field for Benet, there was low energy," Buzelis said.

But that swoon didn't last once the game got going.

"We didn't let it get to our heads. We fought so hard to especially make sure the seniors got something to leave with," she commented.

Callahan and her teammates tried to take Coach McNiff's words about leaving the past behind to heart.

"He says, 'You can celebrate a win or be sad about a loss until midnight'," she related. "So after midnight, it was in the past and all of Friday was focused on Benet. We definitely tried to put together a good game to finish out and take third place."

Torsberg said the team was able to set its emotions aside and focus on ending the campaign on a winning note.

"We played for what would be the final high school lacrosse game for five of us (seniors)," she said. "We finished strong, and I'm just very proud of where we got for not being able to play that long together."

The girls said they will remember special moments like "Newbie Day" when the seniors surprise all the fresh varsity squad arrivals and go out for team bonding or just having meals together after practice to fortify their camaraderie.

McNiff will soon have another reason to celebrate as he and his wife are expecting a baby girl in August. He recounted what he told the team at their season-ending banquet.

"I said, 'You guys have taught me how to be a better coach and a better person, and now you've given me a jumpstart to being a good father," McNiff related.

He looks forward to having a full year to prepare for next season and a roster full of players with valuable varsity and state tournament experience.

"I feel like now we've got things in place so the girls will go into next year knowing the system offensively and defensively. That's going to give them an idea what to expect," he said.