Third arrest made in dealership burglaries 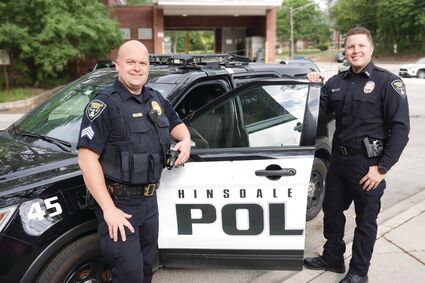 Hinsdale Sgt. Tom Krefft (left) and Ofc. Ryan Grahn, along with Ofc. Michal Dzierzega (above) were presented with commendations by the Hinsdale Village Board June 15 for their response to a burglary and attempted vehicle theft last month at two village dealerships along Ogden. Three arrests have been made in the incident. (Jim Slonoff photo)

The Hinsdale Police Department has arrested a 15-year-old male Chicago resident in connection with the May 17 burglaries to the Land Rover and Continental Motors dealerships on Ogden Avenue.

DuPage County State's Attorney Robert Berlin and Hinsdale Police Chief Brian King announced June 16 that the juvenile - the third suspect and second juvenile apprehended in the case - was taken into custody June 15 from his residence and charged with armed violence, aggravated unlawful possession of a stolen motor vehicle, burglary and criminal damage to property.

According to Hinsdale police, on May 17 officers responded to alarms at the two dealerships to find a group of three individuals attempting to flee the scene in a stolen vehicle. The officers boxed-in the vehicle, and the suspects attempted to flee on foot. One subject fled while holding an automatic handgun with a high-capacity ammunition magazine. RaJohn Stewart, 24, of Country Club Hills, and a 16-year-old male were apprehended at the scene and charged on multiple counts.

On May 26, Hinsdale officers executed a search warrant in south Cook County and seized a vehicle also used in the crime. A search of the vehicle led to the recovery of two fully automatic firearms with extended magazines.

On June 15, Hinsdale detectives tracked down the 15-year-old suspect in Chicago's Englewood neighborhood, later learning he was wanted on two warrants from 2020 for aggravated unlawful use of a weapon and burglary after being arrested and failing to appear in court. The offender was ordered to be detained in DuPage County on the Hinsdale charges.

"The identification and apprehension of this juvenile demonstrates the Hinsdale Police Department's commitment to seeing a case through from beginning to end. I have no doubt that thanks to their efforts, anyone allegedly involved in this crime will be held accountable," Berlin said.

King said investigators determined that the vehicle the suspects arrived in was reported stolen out of Chicago on May 9 and that it had several bullet holes. He expressed relief that the suspects are being held in DuPage.

"In the short period of time we have investigated this case, the Hinsdale Police Department has recovered three large-capacity firearms, one an AK-47 fashioned into a handgun," King detailed in a statement. "The decisions to detain in DuPage County could potentially save the lives of these young men or someone else."

He said his department is seeking additional suspects involved in the incident.

Stewart posted bond and was scheduled to be in court yesterday after press time. The 16-year-old suspect remains in custody.

At the June 15 village board meeting, Village President Tom Cauley presented Sgt. Thomas Krefft and officers Ryan Grahn and Michal Dzierzega with commendations for their actions that day.

"This incident could have had a tragic outcome. It did not because of the professionalism and courage displayed by these three officers," Cauley proclaimed, adding, "I think we all should be very thankful for our police officers."