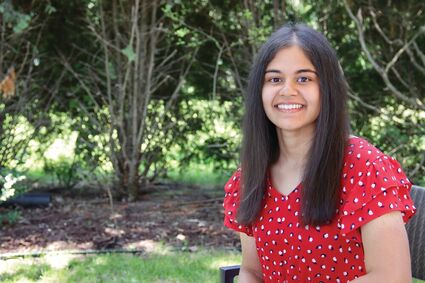 The Hinsdale Central High School rising senior recently received the National Community Service Awards Ambassador Award from the United Nations Association after logging more than 100 hours of service between June 2020 and April 2021. Many of those hours were spent at the head of Hinsdale's local chapter of Period.

Period is an international organization that strives to eliminate period poverty across all communities and economic sectors.

"Basically what we do is, through service events and education, we spread awareness and fundraise to provide feminine hygiene products to those who need them," Mehta said.

Although seldom talked about, Mehta said many struggle to afford the necessities that come along with their monthly periods. In fact, as many as one in four in need of menstruation products has difficulty accessing or affording them, with many consequently turning to unsanitary items such as

"As a result, they get diseases that they could have otherwise prevented," Mehta said.

Others miss work or school because of their lack of access to the products they need. Mehta founded the Period chapter here after spending time at area food pantries. She noticed that feminine hygiene products were seldom, if ever, provided. So she decided to do something about it. She discovered Period and applied to launch a local chapter, joining other nearby communities such as Naperville and Chicago.

Worldwide, Period has partners and chapters in 49 states and 50 countries. In 2020, 5 million products were distributed thanks to the efforts of Period. With about 15 active members holding fundraisers and spreading the word, Hinsdale's chapter has been able to donate thousands of products to food pantries and women's shelters, Mehta said.

"This year, we have bigger plans," Mehta said.

Along with continuing to raise money and donate products, she and the other members of the local chapter hope to speak with middle schoolers about the importance of menstrual health and breaking down the social stigma of menstruation. "It's just about starting the conversation," Mehta said.

With just one year left in her high school career, Mehta is already looking forward to how she can help her community after graduation. "I think it would be cool to serve underserved populations," said Mehta, who is considering a career in medicine.

While she is honored to be recognized for her work with Period and the other organizations she serves, including LEAP into Africa and the Red Devil Service Club, Mehta said she never set out to win an award. In fact, she didn't know such awards existed until she received an email from Hinsdale Central Principal William Walsh. Mehta also was recognized with a Zero Hunger Award for hours logged fighting hunger in the Hinsdale area.

"I let my passion guide me," she said.