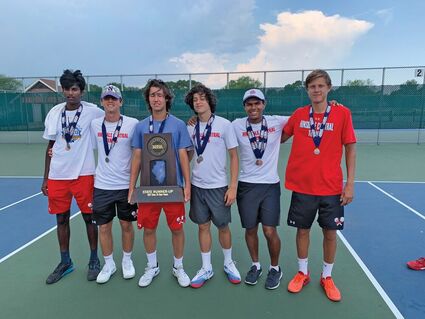 That's what sets Hinsdale Central boys tennis apart, according to varsity head coach John Naisbitt. It's why the team entered this season as the two-time defending Illinois champion. It's why they've won of nine of the last 13 state titles. And it's why they own more first-place trophies (26) than any other program.

"We are just a school that has incredible tennis talent," Naisbitt remarked earlier this month. "It's been a tradition for over 50 years."

Having lost last season to COVID, the Red Devils blazed their way into this year's IHSA state final meet June 10-12 in Arlington Heights, steamrolling their West Suburban Silver conference opponents and dominating their sectional with sweeps of the singles and doubles draws. But talent needs sharpening to maintain its edge, Naisbitt acknowledged. And with no multi-day competitions or non-conference match-ups allowed this season due to safety precautions, he knew this year's three-day state final would be especially demanding.

"This was our first tournament and it showed," Naisbitt said. "We didn't play as well as we anticipated."

By the end of day one, the battle for top honors had already narrowed to two familiar foes. Central and New Trier - second in total state titles with 21 - were knotted at 24 points, seven points clear of Stevenson which had been relegated to consolation brackets. New Trier opened up a lead on day two, a margin the Red Devils were ultimately unable to overcome. In the end, the Devils' tally of 35 points was outstripped by the Trevians' 42.

Leading the way for Central was the doubles team of juniors Jai Vallurupalli and Mujtaba Ali-Khan, who defeated their New Trier counterparts 6-3, 4-6, 6-2 to capture third place. Senior Ansh Shah finished fourth in singles after having to default the third-place match due to cramping. Junior Noah Hernandez and the doubles team of senior John Fakouri and junior Dean Kamenev made it to the consolation semifinals, earning seven points each for the team.

"They played well and they deserve it," he said. "They had a good tournament."

Naisbitt suggested during an interview before the conference meet that the lack of top-tier competitions this season would put Central at a disadvantage against other Illinois schools, whose athletes were able to play a more conventional schedule.

"We're used to really high caliber opponents," he related. "If we can manage to pull (a state championship) out, it will be a real testament to our resiliency."

Vallurupalli said playing for Central is bit like being on an All-Star team.

"You have guys on the team that could be the No. 1 player on half the schools in the state," he said.

Shah echoed Naisbitt's comment about needing to level up for the state meet this year. It was clear in a vigorous late May practice session between him and Vallurupalli that they were doing their best to simulate the championship environment.

"We're fortunate to have a team that has enough (talented) guys that we can practice within our bubble and still get good competition," Shah said.

After the state final, Naisbitt praised his players, with two making the main draw semis.

"I thought Ansh Shah had a great tournament," he said. "And our one doubles team coming in third, that was solid."

With lots of returning talent next year, Naisbitt is confident in their state-title-or-bust chances.

"We have one goal, and it's to win state, and nothing should stand in the way of that one single goal," said Naisbitt, who is only the third Central varsity boys tennis head coach since the 1940s.

He credited his predecessor Jay Kramer for establishing the program's uncompromising focus.

"So that's what we do from day one, we work to win a state championship," he said, "It's just nice to be part of that tennis excellence as a tradition of our school."