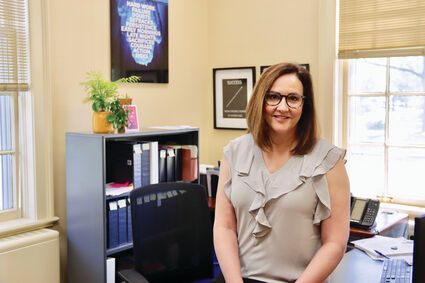 Andrea Lamberg remembers the exact moment that set her on the path toward her new job as Hinsdale's finance director.

Lamberg said she was about 10 years old when she became enthralled with the paper that her older sister was using for her homework. The ledger was filled with lines and boxes just waiting to be filled with numbers - numbers about which Lamberg was eager to learn.

"I was fascinated. I wanted to do whatever that was," Lamberg said.

That early version of a modern day spreadsheet planted a seed that would grow into a career in finance for Lamberg, who came to the village in early May from the city of Park Ridge, where she also served as finance director.

While her title is the same, Lamberg said her job in Hinsdale requires a wider net of knowledge and more involvement with Hinsdale's relatively small staff. Unlike Park Ridge, Hinsdale's parks department falls under the village's purview, so Lamberg is learning about things like pool maintenance and playground upkeep as she helps to make decisions about how and where the village's money is spent.

Likewise, it's important for Lamberg to have a basic understanding of every part of the village's infrastructure. She needs to know not only how water in the village is paid for, but how the system runs and what maintenance might be on the horizon.

"They definitely don't cover that when you study accounting in college," Lamberg said, but as someone who describes herself as a lifelong learner, she's eager to gain the necessary knowledge.

Lamberg was raised in the western suburbs but headed north to University of Wisconsin in Green Bay to earn her accounting degree. After a stint with a private insurance company, she entered the world of public service with Brown County, Wis. It's there that she learned to love working for a local government.

"I like seeing how what I do has an actual impact on the community," Lamberg said. The job allows her to see a community's hopes and dreams turned into actual plans and completed projects.

Lamberg's time in Wisconsin left her with a college degree and a clear professional path. But that's not the only effect those years had on this native Illinoisan.

"I'll cheer for the Bears, as long as they aren't playing the Packers," Lamberg said.

As Hinsdale's finance director, Lamberg said her days are fast paced and often unpredictable. The to-do list with which she starts each day seldom resembles her list of accomplishments at day's end. And that's one of the things she likes most about her job.

"No day is the same," Lamberg said.

After just a few weeks, Lamberg said she already is impressed with the people who call Hinsdale home and their interest in making the village a place of which to be proud.

"It just seems like a very friendly, welcoming community," she said.

Like Hinsdale itself, Hinsdale village manager Kathleen Gargano was someone Lamberg knew only by reputation prior to coming to Hinsdale, but Lamberg said Gargano played a key role in convincing her to take the job.

"She sets very high standards for herself and her staff," said Lamberg, who called it a privilege to work with the caliber of professionals that make up the Hinsdale village staff.