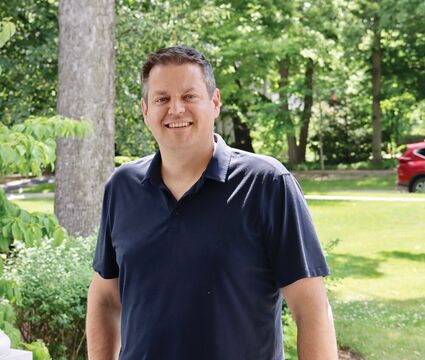 Nick Newlin GREW UP IN HINSDALE, MOVED BACK IN 2000 • HINSDALE INFERNO BOARD MEMBER • GRADUATED FROM U OF I & NORTHWESTERN'S KELLOGG SCHOOL OF MANAGEMENT • MARRIED TO EILEEN • WORkS IN INVESTMENT BANKING

Nick Newlin had a rather strenuous introduction to fatherhood 19 years ago with the birth of his daughter, Emmanuelle.

"She didn't sleep outside of our arms for the first two, if not four, months," he related.

Today, as dad to twins Henry and Sloan, 15, and William, 12, in addition to Emmanuelle, Newlin regards his parenting debut as a precious experience that marked the start of a new life chapter. Father's Day is an opportunity to reflect on the unique individuals he's helping nurture.

"You can see elements of their personality from day one, and it's fun to see how that develops over time, and what that becomes when they're a more of a full functioning adult," he said.

He identified the maturation process he's gone through from caregiver to advisor and mentor.

"As they get older and as I evolve as a parent and get better at it, you can kind of move beyond where it's about teaching broader life skills and what it means to be a good person," he said. "Not that they don't need you any less, it's just a different role that you play."

Hinsdale seemed an inviting spot to settle with his family, considering his fond memories as a youth here.

"I had a great experience growing up here, and it seemed to make a lot of sense," Newlin remarked.

The fourth of five siblings, Newlin suspects he was afforded a little more autonomy than his elders.

"A lot of playing out in the yard, playing every kind of sport imaginable year-round," he said. "It was kind of an idyllic childhood."

He considers his father a role model for his own approach to fatherhood, investing intentionally in both his professional and family activities.

"He was a very dedicated worker," he said. "Anytime we had an sporting event or a school event, he was always there. He made time for family, and we knew that he had to work hard, but we knew how important we were to him."

Newlin was also close to his father-in-law. He recounted his daughter's touching words upon his passing a little over a year ago.

"She said, 'He just makes you feel known and seen,' " Newlin said. "And I just thought that was an incredible testament to who he was."

Even with all the pain inflicted by COVID the last 15 months, he said the ordeal did help reinforce his bond with his children.

"Being confined with each other wasn't a chore, because we tend to like to do things together anyway," he said. "We enjoy each other's company."

And Newlin enjoys watching his children take flight in their various pursuits.

"Just seeing them do things - like performing in a musical or playing basketball - I get an immense satisfaction from," he said. "And I never would have guessed that that would have been the case."