It takes a village - HEATHER BERECKIS, SUPERINTENDENT OF PARKS AND RECREATION 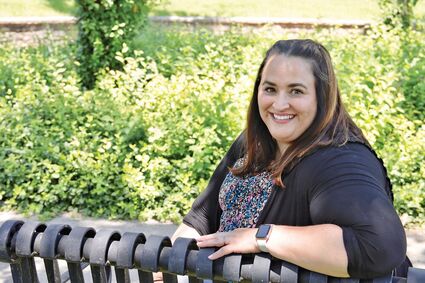 In fearful times, look for the helpers.

Growing up, Heather Bereckis heard that Mister Rogers-issued maxim often from her mom. And internalized it.

"Knowing that I've helped someone in some way," Bereckis said, "that's a good day."

Before becoming superintendent of parks and recreation in Hinsdale, Bereckis was aquatics director for the YMCA of Greater Cleveland. The village forester there, in partnership with the Y, was leading a plant identification kayak tour along the shore of Lake Erie. Bereckis went along and noticed a mom who was clearly out of her comfort zone on the excursion with her child.

"As we were going out into the lake, I could see she was panicked," she recounted. "I said, 'We're here with you. We can do this.' I remember telling her to be brave, to show that for her child."

"Afterwards she was so grateful and so happy. she ended up signing up for four more programs," Bereckis said.

Raised on a working farm in rural northeast Ohio where several generations had resided, Bereckis and her eight younger brothers all did their part.

"My mom's family lived traditionally," she related. "We only had five basic TV channels."

Sports and Scouting were a big part of her life, and Bereckis ran the waterfront for boys summer camp for three seasons. That led to a parks and recreation internship with the city of Mentor, Ohio.

"That's when I really discovered that I liked working in a municipal environment," she said. "I got to do a little bit of everything. I got to run (the public access channel) and worked closely with public services. It was very interesting, and I knew I wanted to do something that helped people."

A leisure studies major in college, she said the degree's name belies its rigor, with courses in law and inclusion as it relates to recreation. Bereckis and her husband relocated to Washington for a couple of years, where she worked for the City of Bellevue and its Boys and Girls Club, before coming back to the Midwest.

She was hired as Hinsdale's recreation supervisor in 2013, immediately charmed by its tree-lined streets and walkable downtown, as well as the opportunities to spread her wings. She was elevated to her current post four years ago, leveraging a knack for out-of-the-box thinking and efficiency.

"We do the same things here that you see three times the staff do in other communities," commented Bereckis, who manages a nearly $3 million budget. "I've got to have my hands in a little bit of everything."

From helping write a new policy on tribute ribbons to advising the village's economic development commission to planning the annual Fourth of July parade ("about a nine-month long process"), Bereckis is making connections.

"I enjoy meeting people in town and learning what drives them and why they love the community," she said.

It's often small joys, like recently leading a resident through the pool pass purchasing process, that validate her choice of career.

"I rarely have really bad days."