Hinsdale teen quite happy to be back on stage 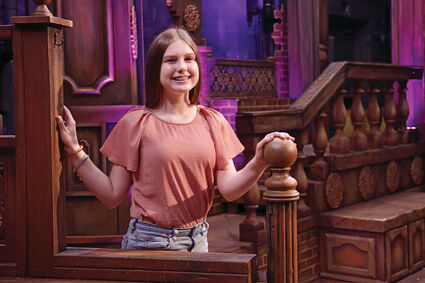 Julianna Waters is eager to play the Cat this weekend in Stage Door Fine Arts' "Honk" at The Community House.

She got a taste of being in front of a live audience last week as a member of the ensemble of "Emma," also a Stage Door production.

"This is the first opportunity we've all had to get back on stage and perform again," she said the morning after opening night. "It's really nice to perform again and just see the audiecne and stuff like that - and see all of your friends that you missed."

Waters, who started performing in plays at Union Church of Hinsdale as a kindergartner, said she enjoys playing the Cat, the villian who tries to stop Ugly, the duckling, from finding his mom after he got lost on the farm.

"I'm usually a much nicer person, so it's fun to act out someone I'm not and to have a bigger role this time," she said.

While this is the largest role she's had at Stage Door, she played Violet in "Willy Wonka" in the Clarendon Hills Middle School musical in seventh grade.

"I really like just singing and dancing and acting in general," she said. "It's really fun to let loose and perform for other people, and I've been practicing dance at Impact Dance Studio, so it's also a really great opportunity to show what I've learned."

"Next week I have four dance recitals and 'Honk' tech week and the 'Honk' shows," she said, noting her eighth-grade graduation is also this week.

This summer, she plans to do more of the same.

"We're doing another Stage Door show, so I'm looking forward to that," she said. "It's going to be the last show that a lot of the older kids get to do, so that will be the last time I get to peform with them."

Summer also will include a trip to Las Vegas for her sister's national dance competition and a trip to San Diego for a family reunion that was delayed due to COVID-19.

In the fall, she plans to take honors choir at Hinsdale Central and try out for a musical, if possible. She has not ruled out performing as a career.

"I'm not sure what I want to be when I grow up, but the three career choices I have in mind right now are either being an actor or a lawyer or a creative writer," she said.

Stage Door has been an important outlet for Juliana, her mom, Jenny, said.

"I think Juliana is reserved in school and reserved unless she is with her best friends, but on stage she comes alive and they saw that in her and they encouraged it and developed it," Jenny said. "We will be forever in their debt."