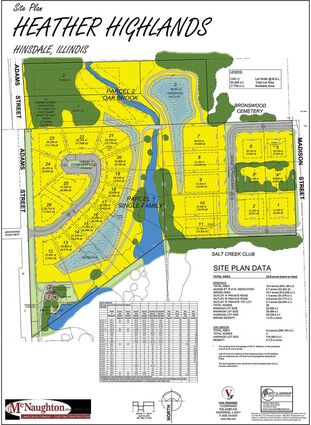 This rendering shows the revised Heather Highlands subdivision proposal from McNaughton Development for the mostly undeveloped site north of Ogden between Madison and Adams streets. It was rejected by Hinsdale trustees at a board meeting last week, the second time McNaughton has failed to get village support for a project there. (image provided)

Another attempt to develop land bisected by flood plain in Hinsdale's Fullersburg community has again sunk under opposition from neighbors and village officials.

At a special village board meeting May 26, trustees were united in their concerns that McNaughton Development's vision to build 24 single-family homes on 25.6 acres straddling Hinsdale and Oak Brook north of Ogden Avenue between Madison and Adams streets was too dense and out of character for the area.

Trustee Laurel Haarlow said the developer's request for bulkier homes and smaller yards than allowed by code "will result in a very different neighborhood feel than the surrounding existing homes present."

The revised Heather Highlands proposal of nine single-family homes along Madison and 15 age-restricted homes on Adams reduced the scope from McNaughton's original plan for 46 single-family homes. McNaughton's first try encompassed 37.1 acres and was rejected by the village's plan commission last September. The Institute for Basic Life Principles currently owns most of the land involved.

Cauley said he personally didn't see the wisdom in permitting this non-compliant development.

"I'm not clear why you would ever, in my opinion, give more than the code would allow when you're just doing straight single-family R-2 homes," he said.

Signaled that trustees would vote against referring the application to the plan commission, developer Paul McNaughton Jr. agreed to listen to trustees' comments for reference. But he said pursuing a strictly code-compliant project is not likely.

"We don't really have an appetite for a straight R-2-conforming subdivision for a variety of reasons," he said, suggesting the price points would be prohibitive.

Trustee Scott Banke said McNaughton's lack of dialogue with nearby homeowners is a primary reason for the impasse.

"There's almost a general contempt for the residents and their feedback," he said. "There needs to be a realignment with the way the McNaughton organization is approaching the residents that live in that area to receive some level of consensus."

Cauley acknowledged the flood plain on the property requires unusual site configuration. But he took exception to the developer's request to narrow its access streets.

"We're being asked to build 15 homes for retirees that you can't get a fire truck in the neighborhood," he said. "That to me is a non-starter from the absolute get-go."

Trustee Michelle Fisher said McNaughton had made progress on its proposal since last year by endeavoring to build R-2-compliant homes on the Madison side, but not so on Adams.

Trustee Luke Stifflear floated the idea of McNaughton donating the 20 acres of wetlands on the site to the village for a public park as a potential path to compromise.

"We've been at this for over two years, and it just doesn't seem like the board is interested in that type of development," he said.

Noting the land will eventually be developed, Cauley indicated he wasn't foreclosing on a solution.

"If there's some meeting of the minds as to what that would be conceptually, we could have him come back and we can go through this process again," he said.