A shave and a haircut raises quite a bit 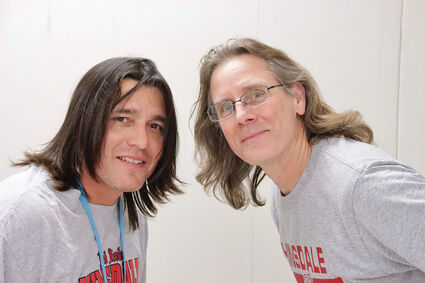 Coaches Jason Hayes (left) and Jim Kupres - with the help of wrestling and track athletes, their families and others - raised more than $6,500 for St. Baldrick's to fund pediatric cancer research. The two had let their hair grow for more than a year during the COVID-19 pandemic. (Jim Slonoff photos)

Oh, and the coronavirus pandemic played a role as well.

The organization they approached was St. Baldrick's, known to Kupres because his daughter, Rachel, had her head shaved for a school fundraiser a few years back when she was in third grade.

"She was the only girl from her class that did it and she just thought it was an important thing to do," Kupres said.

He also wanted to provide an opportunity for athletes to give back during the pandemic, since many of the ways they typically do so were canceled due to COVID-19.

Hayes said he was happy to help.

"I think it was a great experience," he said. "It brought more awareness for some people who are not aware of the organization. It was a good event. It turned out very positive."

Molly Watcke, mom of senior runner Dan Watcke, was happy to help out, especially when she learned a charity that funds pediatric cancer research would be the beneficiary.

"I immediately jumped on it," she said. "I had a brother who died from leukemia when I was a young child. This organization pulls at my heart strings a little bit."

Her brother, Tim McClimon, died in 1977, when he was in fourth grade and she was in first.

"If he had been born a little later - he had the form of leukemia that is very treatable now," she said. "They were just starting to talk about bone marrow transplants at the time."

Although St. Baldrick's does not require fundraisers to shave their heads, Kupres and Hayes decided to do so May 20 after school. A host of wrestling and track athletes, their families and Central staff were in the cafeteria to witness the event.

"I feel like I'm in a frat initiation," Kupres said as staff members from White Buffalo were getting ready to shave his and Hayes' heads

"Right now, show of hands, who wants me to keep my hair?" Kupres asked. "Thank you, Rachel. Thank you, Andrew. Two people? Is that it?"

The crowd came up with its own answer to his query.

Michael Logan and Jessica Sheppard from White Buffalo were on hand to do the honors. Logan is a former Hinsdale Central student.

"He is the nicest young man in the world," Kupres said.

After the coaches lost their locks, about half a dozen athletes had their heads shaved, too, Watcke said.

"The exciting part about that is I don't think any of them were planning on it ahead of time," she said. "They were having so much fun."

"I went to watch and take pictures," she said. "It just seemed like a normal event, finally. As a parent, I was so happy that the kids were cheering and screaming and high-fiving."

Watcke noted the sacrifices the kids have had to make over the past year.

"The timing couldn't have been better," she added. "It was almost like an end-of-the-year celebration doing this."

Hayes is happy to have a new cut after 16 months of growing his hair out. 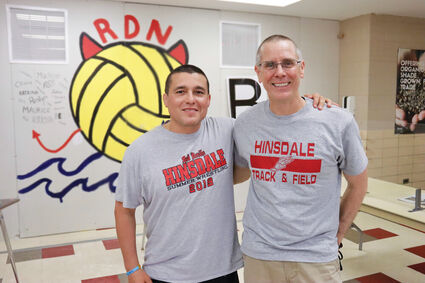 "I did enjoy the long hair for a little while, but I didn't realize how much work goes into it," he said.

Kupres was happy to get rid of his long hair, too, although he said it might have come in handy on Saturday.

"At our Saturday track meet, not realizing how hot the sun was, my forehead and head and neck all got fried," he said. "I was unaware of the lack of hair that I had."

He agreed with Watcke that the event provided a boost for all who attended.

"We did something great for St. Baldrick's and also, I think, when people come together to support someone or something, it's always a good thing."