Honoring those lost in effort to keep all free 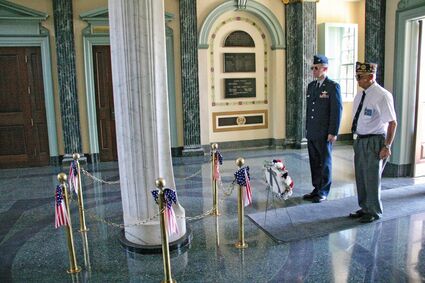 Each year as a member of Hinsdale's American Legion Post 250 read off the names of Hinsdaleans who paid the ultimate sacrifice, a memorial wreath is placed at the base of the "Winged Victory" statue. The statue and the bronze plaques, listing service members who were killed, are in the foyer of the Memorial Building. The Memorial Day procession and ceremony has been canceled for the second year in a row because of COVID-19. (file photo)

In Flanders fields the poppies blow

Between the crosses, row on row,

That mark our place; and in the sky,

Scarce heard amid the guns below.

We are the Dead. Short days ago

Loved and were loved, and now we lie

Take up our quarrel with the foe:

To you from failing hands we throw

The torch; be yours to hold it high.

If ye break faith with us who die

We shall not sleep, though poppies grow

Canadian John McCrae was a military doctor serving in World War II when he found himself positioned on the west bank of the Ypres-Yser canal in France in April 1915.

Historians offer differing accounts of when McCrae penned the first draft of what would become "In Flanders Fields." Whether he wrote the now-famous poem right after Helmer was buried or the next day, it has become a poignant part of Memorial Day remembrances in Hinsdale and across the country.

The COVID-19 pandemic continues to affect the ceremonies on which we rely to mark observances like this, and the procession that typically travels from Third and Washington streets to the lawn of the Memorial Building will not take place. "In Flanders Fields" will not be read (rest in peace, George Hogrewe, who held that honor for three decades before passing in September 2019) and the Names of the Honored Dead will not be read.

Fortunately nothing prevents us from continuing our tradition of listing those names here.