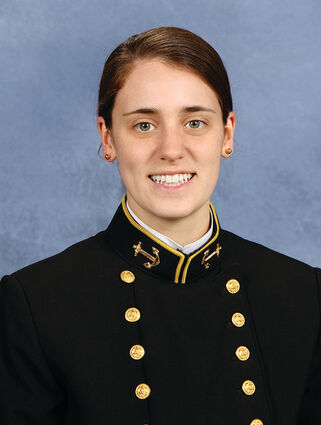 How did your Naval career intersect with Hinsdale Rotary?

She was finishing her fourth and final year as a midshipman at the U.S. Naval Academy in Annapolis and was eager to pursue graduate studies, if the Navy would support it.

The master's program in engineering at Oxford University accepted her, but she would need to raise half of the two-year program's $64,000 tuition herself.

"I thought it would be a good experience before beginning my naval career, she said. "I really wanted to go abroad, since I'd only gone abroad once in my life."

Lekas had a short fundraising window, and the emerging pandemic was not helping.

With the help of her mom, the Hinsdale Central alum identified organizations she hoped might help. Hinsdale Rotary was one of them.

"They were actually the only one that responded back," she said.

After doing its due diligence to verify her request, the club raised $4,300 for her. Ultimately other benefactors emerged to fill the $27,700 gap and her request was granted. She became one of only 20 in her class to be extended such an opportunity.

She began her research focused on 3D printing last June and acclimated to British life.

"The Navy pays for my housing, so I found a nice flat to rent, which is really nice," Lekas said.

Lekas admitted she originally had her heart set on attending West Point until she learned of the Navy's highly regarded aerospace engineering program.

And did she, even with the often grueling schedules?

"Looking back on it, I did. But I didn't get much sleep," said. "Everybody who goes there was a class president or captain of their high school team. Everyone's just very impressive."

Motivational to be sure, but Lekas also found a supportive community as they ground through adversity they all called "the Suck."

Summers were the payoff, as she was able to spend a week in a submarine and go backpacking in Alaska for 25 days.

"No showers or toilets - it was great!" she remarked.

In December, she married Matthew, a fellow Naval officer. They had to spend the next several months apart until Lekas' academic year finished this spring.

"It was weird seeing him in 3D instead of on FaceTime," she joked.

She'll head back across the Atlantic in a few weeks and looks forward to experiencing the culture in a less COVID-restrictive state of affairs.

Once she earns her degree, it's back on duty.

"I'll definitely apply for the astronaut program.," said Lekas, then alluded to her strong faith commitment. "Or I might want to do missions work."