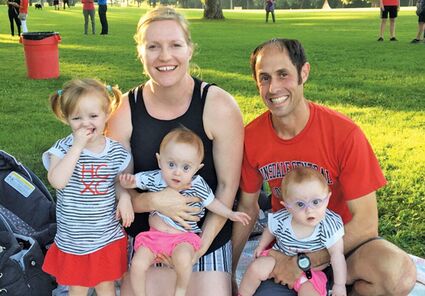 Hinsdale Central coach Noah Lawrence, holding Alexis, and his wife, Megan, holding Beatrix, along with big sister Cleo, have traveled a tough road since they lost Beatrix in October 2018. She and Alexis were born premature, and the COVID-19 pandemic presented additional concerns for keeping Alexis healthy and safe. (photo provided)

He penned a poignant blog on March 14, reminding the student-athletes that baseball great Joe DiMaggio's career was interrupted for three seasons after he enlisted in the U.S. military following the bombing of Pearl Harbor.

Lawrence also wanted to remind the teens why they needed to make sacrifices.

"Please understand that by giving up the beloved opportunities to compete in championship competitions, by avoiding our usual meeting places like schools or houses of worship, by canceling spring break trips and remaining largely house-bound, we are making the nation safer for our most vulnerable citizens," he wrote. "This includes people like my daughter, Alexis."

Alexis and her twin sister, Beatrix, were born at 26 weeks and four days, with lungs that had not fully developed. Lawrence and his wife, Megan, lost Beatrix in October 2018. And last spring, COVID-19 was threatening Alexis.

"In retrospect, the irony is the mass lockdown ended up being very beneficial for her," Lawrence said last week.

Before the pandemic hit, Alexis had been hospitalized six times in less than three years, including a week in January 2020.

"We haven't had to take her to hospital since. Having the entire world make an effort to stop from spreading their germs really did benefit my daughter," he said.

Lawrence, who has been an avid runner since middle school, started writing a blog about the cross country and track teams in 2012, after meeting with Palatine High School track coach Chris Quick.

"One piece of advice he gave me was to write to and about our athletes a lot," Lawrence recalled.

In addition to jotting down personal notes, he also began posting pieces online.

"As I would publish these stories, people seemed to be interested and appreciative, so that was motivating, to know there was an audience, largely from within our program but from some people outside our program," he said.

"I enjoy the process of writing," he added.

When his first daughter, Clio, was born, he said he felt inspired to write about it. He could have done so in a personal diary.

Then, when Megan was pregnant with the twins and they learned about the complications, the blog provided a way for Lawrence to work through his thoughts and emotions. That led others to reach out to help.

"One thing I've learned is people are amazing and generous and more than willing to help, but they need to know you need help," he said. "You can't expect them to know that.

"It's become sort of a virtuous cycle. By putting my vulnerabilities out there, people came to offer support which made me more willing to continue to do that," he added.

Writing and running are very similar processes, he noted, as Haruki Murakami points out in his memoir, "What I Talk about When I Talk About Running."

"Both of them are endeavors that require real work, but which you feel really good about after you're done," Lawrence said.

Lawrence credited his neighbor for introducing him to cross country in middle school. The competition between him and his twin brother, Collin, and the coaching of Joe Newton cemented his love of the sport.

"We were very fortunate to go to York High School, which had a legendary coach," he said. "Once I joined the team at York, he worked his magic and I very much bought in, as did many other young athletes who were fortunate to have him.

"He had already racked up state records for most state titles," Lawrence added. "He had been invited to coach in the 1988 Olympic Games. His reputation preceded him."

Newton made a habit of getting to know every kid on the team, giving each one a nickname and checking in with each at the beginning and end of every practice. But it wasn't just the individual attention he paid to athletes that spurred their performance.

"I think one of the keys to his success was he had very high expectations and was uncompromising in insisting that his athletes meet them," Lawrence said.

Lawrence knew he wanted to be a teacher and coach before he headed off to compete in cross country and track at Grinnell College. He was hired in 2005 to work in the social studies department at Central, where he now teaches African-American history, East Asian studies and world cultures.

He had been coaching alongside head boys track coach Jim Westphal for 16 years when the pandemic hit. They quickly realized that they had to help the team adjust to a new reality.

"That was one of the ways that we adapted, was kind of recognizing pretty early on that our role now is less about figuring out the right amount of mileage or the specific workouts and it's more about how do we provide support in this time of uncertainty," he said. "We started meeting on Zoom and we would have team meetings where we would just check in with each other."

He encouraged the boys to write notes to their teammates and go for a run past their houses, dropping the notes in their mailboxes, as a way to keep the kids connected.

"The most important thing we could do during the time of quarantine was just maintaining a sense of team, do whatever it took to maintain that," he said. "That was priority No. 1."

Cross country and a handful of other sports were able to resume their seasons in the fall, giving the boys a much-needed social outlet. Lawrence said most of his student-athletes handled remote learning well.

"I also think remote learning favored students who are highly self-motivated," he said. "Cross country runners by nature fit that profile. The athletes I coach were a bit better equipped to adapt to the new environment."

And now the track and field season is well underway, with a state meet set for June 17-19.

Alexis, who will be 4 in September, has something to look forward to as well.

"This summer for the first time she is going to go to a summer camp where she'll get to be around other children," her dad said.

Lawrence continues to write his blog and hopes one day to organize his posts into a book.

"I started to work on it at the beginning of COVID, but then I was home with both kids all day, and I pretty quickly realized it wasn't the time to write it yet," he said.

Lawrence said the master narrative will explain what cross county has meant for him.

"I would say that I was always passionate about the sport and loved coaching, but what I didn't realize that I was doing was that I was weaving my own safety net, and when the time came that I needed support, it was the cross country community that was there to lend that support," he said.

Team members' moms made dinner and babysat for Clio when he and Megan were at the NICU to see the twins. When they lost Beatrix, team members brought hand-written letters of support to give him at

Westphal said Noah and Megan's willingness to be open with their grief was powerful and activated an incredible network of support.

"It makes you appreciate how important you and your family are to others - that you didn't realize," he said. 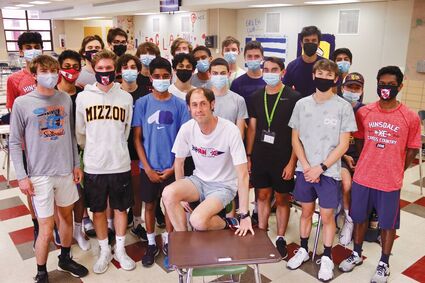 Assistant boys cross country coach Noah Lawrence said he's made an effort to write to and about his athletes. Writing - like running - gives him an opportunity to sort through and make sense of his feelings. He titled on blog post "Requiem for a lost season." "I think writing that piece was a way for me to grieve and for the seniors who lost their season to grieve as well." (Jim Slonoff photo)

Westphal, who has watched Lawrence grow as an individual and a coach over the past 16 years, sees a change in how he deals with athletes, especially when they have a tough race.

"He has a much different perspective than he did 10 years ago," Westphal said. "I think his compassion, empathy for that has really evolved, I think, from having children but also from experiencing loss."

Lawrence said the experiences he's lived through over the past three years have helped him appreciate that difficulty and loss are part of life.

"I can say from 30 to 35, I had so many accomplishments," he said. "We got married. We bought our home. I finished my graduate work. We won two state titles. We gave birth to Cleo, which had always been a dream of Megan and me to begin a family. It was like a trajectory straight up.

"And then the next five years from 35 to 40 were so much harder," he continued. "I think at age 35 I had a sense that I was invulnerable and immune to the tragedies that were all around, that were never going to affect me.

"I no longer live under that illusion. I perhaps have a more honest and realistic world view."