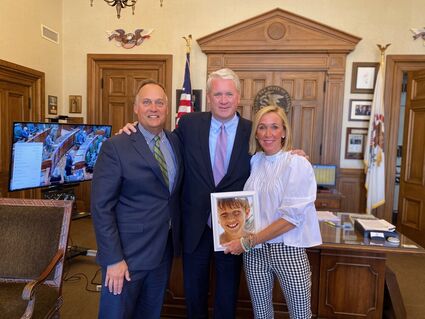 Rob and Nora Tonn were in Springfield last week as Rep. Jim Durkin and his colleagues in the House voted to remember their son by naming the 47th Street bridge the Brooks Edwin Tonn Memorial Bridge.

For three and a half years, plastic cups in the fence on the 47th Street bridge have reminded many of the courage young Brooks Tonn of Hinsdale displayed in his fight against cancer.

Now Brooks, who passed away in December 2017 after a year-long battle with rhabdomyosarcoma, will be remembered in a more permanent way. The Illinois House of Representatives voted 118-0 May 12 to name the bridge the Brooks Edwin Tonn Memorial Bridge.

"In his 10 short years of life, Brooks' contribution to his community was profound and meaningful," state Rep. Jim Durkin said on the house floor last week. "Brooks was always upbeat and positive about life, even during the most painful and difficult times during his cancer treatment. ... He was a special and remarkable young man.

"We often have resolutions honoring those who have passed and it generally is one of sadness," he added later. "This is more a celebration of this young man's life and his contribution to our community."

Brooks' grandma, Nancy Keenan, originally reached out to Durkin in 2019 to propose the idea, Brooks' parents, Rob and Nora Tonn, told me this week. A resolution was written and submitted to the House in early 2020, co-sponsored by Durkin and state Rep. Deanne Mazzochi. Then the pandemic hit.

The bill was re-introduced this year as House Resolution 13, and the Tonns were in Springfield last week when it passed that chamber. (They expect the Senate to pass it and the governor to sign it in due course.) Due to COVID-19 protocols, they watched the event from Durkin's office.

Nora said the experience was emotional and beautiful.

"It was amazing," Rob said. "At the end, when (Durkin) said, 'I want all of you, everyone in this chamber, to stand and join me as co-sponsors of this bill,' and the camera panned back and everyone in the room was standing, it was amazing."

Nora said the resolution was even more meaningful because it carried the number 13, which Brooks wore on his jerseys.

"These are the signs that we get all the time from him," she said.

A sign will be hung under the bridge visible to drivers on Interstate 294. The Tonns said they also hope to work with the village to have a plaque installed on the approach the bridge.

In introducing the bill, Durkin also mentioned The Brooks Strong Foundation, established to fund pediatric cancer research and to offer scholarships for kids undergoing cancer treatment to participate in sports and other extracurricular activities.

The Tonns said they are still working to grow the endowment to fund research. They have enjoyed presenting scholarships to 10 to 12 cancer patients.

"When you are in the throes of cancer treatment, the $1,000 travel baseball bill probably gets pushed to the bottom," Rob said. "We know from Brooks how important (sports) was. It was better than any medicine for him. He just thrived when he was with his teammates and his coaches."

The community response has been unbelievable, Rob said, adding that he and Nora have been overwhelmed by people's generosity.

In addition to accepting donations online, the foundation holds fundraisers - and two are coming up this summer. A golf tournament will take place July 26, and a family softball tournament is planned for Sept. 12. More information should be available soon on the foundation's website at https://www.brooksstrong.org.

- Pamela Lannom is editor of The Hinsdalean. Readers can email her at [email protected]