Three suspects, including an armed 16-year-old (bottom right) fled from a Chrysler 300 after Hinsdale squad cars pinned it against the side of the building at Continental Autosports, one of two Ogden Avenue dealerships burglarized early Monday morning. Security video shows the offenders inside one of the dealerships. (photos courtesy of Hinsdale police)

Police responded to an activated alarm at Continental Motor Sports, 420 E. Ogden Ave., shortly after 2:20 a.m. and pinned the suspects' vehicle against the building with two squad cars. Three suspects then exited the vehicle and fled on foot.

"The third is a 16-year-old juvenile that is holding the hand gun with a 30-round extended magazine clip," King said. "The officer recognizes that a juvenile is coming out of the car with a gun. He yells 'Gun!' to alert his fellow officers and then he yells at the juvenile multiple times, 'Stop! Put the gun down!' as the juvenile flees eastbound from the scene."

The 16-year-old made it as far as the first residential yard on County Line Road just south of Ogden when he was tazed by an officer and taken into custody.

The juvenile also has been charged with armed violence, unlawful possession of a weapon and possession of a firearm by a street gang member, King said. He will be held in custody until his next court date.

Police initially responded to an activated burglar alarm at Land Rover/Jaguar of Hinsdale at 336 E. Ogden Ave., where they found a broken window in an overhead garage door and glass inside, according to the release. While investigating at that site, a second alarm sounded at Continental. There, police found a broken window and a running 2018 red Ferrari convertible, valued at more than $250,000, driven outside of the service bay into the rear lot.

After police pinned the Chrysler 300 the men were driving and took the teen and Stewart into custody, they learned the car was reported stolen out of Chicago on May 9, according to the release. The third suspect got away on foot. Police believe a fourth individual was involved as well.

After the two were taken into custody, Hinsdale put out an alert asking for additional officers. Units from Clarendon Hills, Burr Ridge, Oak Brook, Western Springs, La Grange and LaGrange Park responded to search the area for other offenders. The Illinois State Police sent six units and the DuPage County Sheriff's Office provided a canine unit, King said. The searches were not productive, but King is optimistic.

Berlin applauded police for their professionalism and restraint and noted more than 125 vehicles have been stolen from Chicago area dealerships so far this year.

"Car thieves have gotten more brazen in their attempts and continue to thumb their nose at the law," Berlin stated in the release. "In fact, the juvenile charged today currently has multiple pending felony cases against him.

"I want to warn any would-be car thieves that in DuPage County we do not tolerate this type of behavior and will prosecute anyone suspected of such to the fullest extent of the law, regardless of their age," he added.

King also noted the number of dealerships that have been hit. 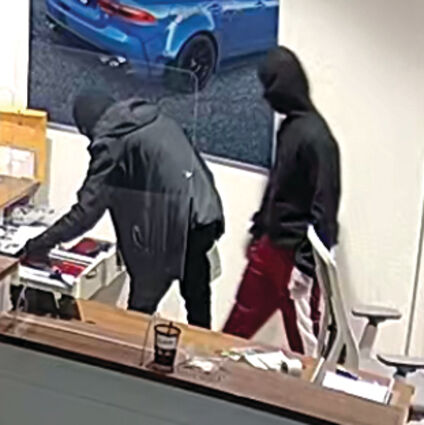 "Due to the professionalism and heroism of the Hinsdale Police Department, there were no gunshots fired," he said at the meeting.

"This could have resulted in a very bad outcome if we had a less competent police force," he added Wednesday.

Stewart's arraignment is set for June 14. The juvenile's next court date is May 26.

An investigation into the matter continues. Anyone with relevant information is asked to call Hinsdale police at (630) 789-7089.