Hinsdale native is one happy camper as outdoor guide 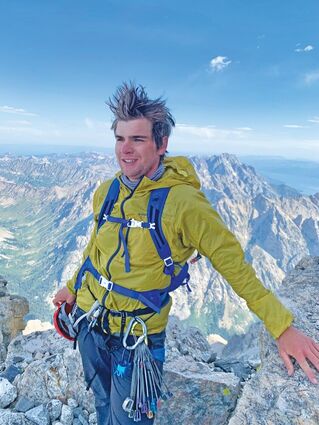 George Bull fell in love with the great outdoors as a 12-year-old summer camper, backpacking the Grand Tetons of Wyoming.

So much so that the Hinsdale native and recent University of Vermont graduate has returned to that same western wonderland for his second summer as a backpacking trip leader at the Teton Valley Ranch Camp, guiding kids ages 12-15 into the wild.

"My hope is that one of the campers I'm leading will find a passion for the outdoors like I did," Bull said from near the camp in Dubois. "That's what's really cool about it."

The Hinsdale Central class of 2017 member earned his bachelor's degree in economics, but he finds adventures in nature just as personally profitable. Two years ago Bull took a National Outdoor Leadership course in Patagonia, which involved spending a month navigating the sea by kayak.

"We spent three nights stormed in (on the coast) and basically ran out of food and had to sleep in a muddy hole," he recounted. "I actually view it as a character-building experience."

He grew up near Salt Creek - perhaps Hinsdale's nearest approach to untamed landscape - and remembered going on school break trips with his family.

"We would drive out west and explore the Rockies and up to Canada. That was my first big exposure to being outside," he related.

Bull recalled his Central graduation ceremony as being extremely hot, but he also remembers having a keen awareness of the poignancy of the moment.

"I remember thinking, 'This is the last time everyone here is going to be together, so that was special,' " he said.

Electing to attend the University of Vermont was about experiencing a different part of the country with a whole different menu of outdoor attractions.

"I really enjoyed it," Bull said of his four years in Burlington. "I remember one of my Central teachers told me, '90 percent of the time at college, you're not in a classroom. So you better really like where you are the rest of the time.' "

At Central he played on the tennis team and helped launch the HCS Family Services Junior Board. He continued those pursuits in college, serving as president and captain of the university's club tennis team and volunteering to help the under-resourced in the greater Champlain Valley.

Sitting in on an HCS junior board meeting a couple of years ago was heartening. "It's pretty exciting. I was super impressed with where it's gone," he said.

Bull keeps close tabs on his Red Devil buddies, whom he still considers his best friends.

He doesn't keep a bucket list of adventures he wants to tackle.

"Just the next one," he remarked, indicating it likely be climbing Gannett Peak, Wyoming's highest mountain peak at 13,810 feet.

He expressed appreciation for the community that nurtured him as a child and counseled fresh Central grads to seize their opportunities.