McClear big in the clutch at tourney 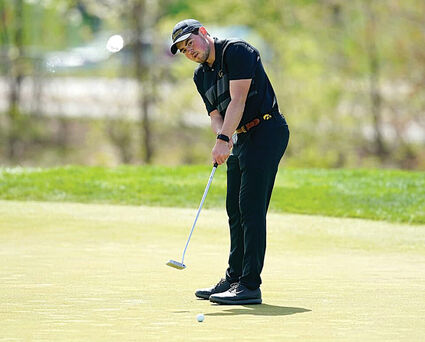 Mac McClear follows his putt during the first round of the Big Ten Championships April 30-May 2 in Carmel, Ind. The University of Iowa sophomore and former Hinsdale Central Red Devil won the individual title at the tournament and led the Hawkeyes to a second-place finish among the 14 conference rivals competing. (photo courtesy of University of Iowa Athletics)

Shooting 1 over par on the front nine was not exactly the way University of Iowa sophomore golfer Mac McClear fantasized his final round unfolding at the Big Ten Championships May 2.

The Hinsdale product reluctantly checked the leaderboard at the turn of Crooked Stick Golf Club in Carmel, Ind. To McClear's relief he was still on top, albeit by just a stroke.

"I knew if I played a solid back nine I could win it," McClear said. "I told myself, 'Stay in your own mind and focus on your game.' "

That mentality translated into medalist honors for McClear, who went on to birdie the 11th and 15th holes en route to a three-stroke victory, posting a score of 215 for the three rounds. At 1 under, he was the only golfer in the field to finish below par.

The win also put him in rarefied company as just the fourth Big Ten champion in Hawkeye history and the second to capture the title outright.

"It feels great," McClear remarked. "To do something that only a couple of people have done is really surreal for sure - and I still have a couple years left,"

The low-key McClear was especially gratified to have his parents and other family members in the gallery. They bore witness to a stellar performance that helped power Iowa to second place as a team, edged out by a mere stroke by its vaunted rival, the University of Illinois.

"To be able to go toe to toe with them on a championship course definitely gives us confidence that we can compete at a national level," McClear said.

That confidence will be essential as the team prepares for the regional tournament of the NCAA Championships May 17-19 at Tumble Creek Golf & Country Club in Cle Elum, Wash. If Iowa is among the low five teams, the school will play for the national title May 28-June 2 at Grayhawk Golf Club in Scottsdale, Ariz.

Of course a year ago at this time, there was no Big Ten tourney, no NCAAs, no nothing,

"Definitely a year ago, sitting at home, I was not expecting to be the Big Ten champion," McClear remarked.

With a skill level and dedication that had earned him a starting lineup spot as a freshman before the season was cut short, he used the unexpected hiatus to further hone his game.

"The COVID break gave me a nice chance to reset and figure out what I was going to work on for the summer," he said.

An assistant coach suggested a couple of areas to target. Unfortunately the fall season was also canceled, but his newfound focus carried into the spring.

"I knew going into the year that if I kept doing what I was doing, I was going to have a good season," he said.

McClear got off to a solid start, then broke through by winning the Spartan Collegiate title at Sea Island, Ga., on March 9. He was named Big Ten Player of the Week. On April 18 he placed second to his teammate at the Hawkeye Invitational. Those results just underscored his immense potential.

"That for sure helped going into (the Big Ten Championships), just kind of gaining a lot of confidence from those experiences," he said

Hinsdale Central varsity head coach Jess Krueger knew the sky was the limit for McClear when he was an integral part of three Red Devil state champion squads from 2016 to 2018.

"He's got a lot of talent and is a hard worker. That's a great combination," Krueger said. "As we're seeing, he had room to grow."

"He's always cheering on and motivating his teammates," Krueger commented.

McClear said the team's camaraderie has elevated his play.

"We have a really tight group of guys," he related. "We like to have fun but we work hard, too. We all push each other to be the best."

Windy conditions in Carmel tested the competitors' mettle. A two-under-par 70 in the second round had earned McClear a share of the lead heading into the last day. He had studied video of PGA luminaries John Daly and Dustin Johnson winning tournaments at Crooked Stick and knew steady play would be rewarded.

"Basically I was just trying to make par on every hole," he said.

"The shots he hit down the stretch were world class. He does everything the right way and he's consistent in his training and practice. He is a deserving champion," Stith stated.

McClear's exploits also made him the only unanimous selection to the All-Big Ten First Team. But he's got a bigger target in his sights.

"It looks really good," he said of the NCAA regional. "I think we got a good draw. I think we have a really good chance if we play the way we're able."