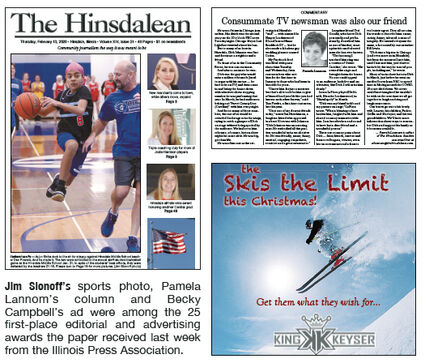 For the second year in a row, The Hinsdalean has been named the best mid-size nondaily newspaper in the state.

The paper retains both the Harold and Eva White Memorial trophy and the Sam Zito Award of Excellence after receiving the most points in the Illinois Press Association's editorial and advertising contests. The awards were presented at the IPA's virtual convention Friday.

"I'm beginning my 40th year covering Hinsdale and never would have imagined we'd be in a position to win back-to-back sweepstakes awards," said publisher Jim Slonoff, who co-owns the paper with editor Pamela Lannom. "When you take into consideration our staff consists of eight full- and part-time members - it makes the accomplishment more special. Pam and I were confident when we launched The Hinsdalean in 2006 that we could create a newspaper that would reflect our wonderful community. Being honored by our peers with this award is incredible and something I never thought possible even once, much less two years in a row."

"I was astonished when we won the sweepstakes in both editorial and advertising last year," she said. "I was thrilled we won them both again this year, especially with all of the challenges we faced covering the community during the pandemic. Jim and I are fortunate to work with a very talented staff who are as dedicated as we are to providing a truly local paper for Hinsdale residents."

In the editorial contest, the paper received 39 awards, compared to 23 last year (see sidebar). Among those were 13 first-place honors, including one for general excellence.

"With a staggering amount of local content, engaging writing and striking photos, this was a clear winner in a division full of outstanding entries," judges wrote. "This paper is chock-full of community news. The Election Day coverage stands out, as does the variety of stories about the early pandemic impacts."

The staff also received a first place in community service for its articles and editorials supporting local restaurants.

Associate editor Ken Knutson earned two individual first places, one for distinguished coverage of diversity and one for headline writing

Lannom received three individual first-place awards: for her editorial "Audience comment has no place at end of agenda," for business/economic reporting for "Flattening the Curve" stories and for obituary tribute for "Consummate TV newsman was also our friend."

"Every newsroom in America covered the local business impacts of COVID-19," judges wrote about her Flattening the Curve articles. "This series is a stellar example of doing it well. You top it off with great quotes and some clever ledes."

Lannom and Knutson earned a first-place in feature writing for "Life will go on after loss of a loved one." They also earned the top prizes in COVID-19 news coverage and COVID-19 sports coverage.

Publisher and co-owner Jim Slonoff earned four first-place awards: for general news photo for "Science can be a laughing matter," for sports photo for "I believe I can fly," for informational graphic for "Understanding state's property tax cycle" and for newspaper design.

"Instead of focusing on the amazing trick accomplished by the performer, the photographer pulled off a masterful feat of their own by capturing the real reason for this event - entertaining the children," judges wrote about his news photo.

More than 100 daily and nondaily newspapers competed in 42 editorial categories in the contest.

"County Line Properties' ad told a story, was creative, captivating and helped the consumer understand why they should choose their agency," judges wrote of her real estate ad. "Well done."

She swept the service/institutional ad category, winning everything from honorable mention to first place.

"Helvetica centered - and other standard ad designs - are not in Becky's portfolio," said Lisa Skrapka, account executive, who sells the ads Campbell designs. "She has a great eye for creating unique ads with good flow, font pairings and color that will work well in newsprint. Becky has been working in this town for many years and therefore knows the businesses as well as I do."

Thirty-three newspapers submitted more than 400 entries for the advertising contest.

Members of the North Carolina Press Association judged both contests.