Historic homes don't have to be museums

Family with four kids, three dogs has settled in nicely to this Tudor revival built in 1924 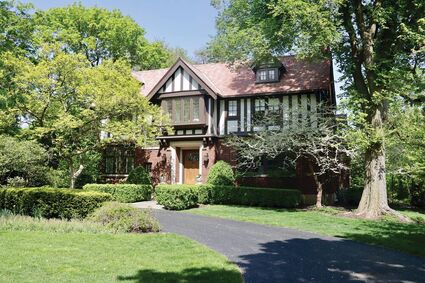 Darlene Bingham and her family traded one historic home for another when they moved from Lincoln Street to Garfield Avenue last summer. The original windows and ornate fireplace carvings are among the features Bingham truly appreciates about her locally landmarked home. "If you can salvage it, I think it's definitely worth it," she said of vintage properties. "These houses were built to stand." (Jim Slonoff photos)

Darlene Bingham is not a student of architecture. That doesn't mean she doesn't appreciate the beauty and charm of a 1920s house.

"We we came in to see this house, I was just totally taken away," said Bingham, who moved to the home at 735 S. Garfield Ave. last summer. "I just couldn't believe the beauty inside. All these timeless pieces," she said, gesturing to the leaded glass window in the front door, the stained glass cover of an overhead light and carved wooden figures that flank the living room fireplace.

"I feel very lucky and blessed to be in such a gorgeous timepiece of Hinsdale," she said. "We love the older homes."

So they started looking at houses in town and found this Tudor revival, just around the corner from the Tudor where Jeff spent his childhood and where his parents, Butch and Jackie Bingham, lived for more than 30 years.

"I thought this was a fun home," Bingham said.

One of her favorite rooms in the house is the sitting room, a cozy, quiet spot filled with natural light.

"It's a great place to unwind after work and share a bottle of wine with my husband as we escape from the kids," she said. "This charming house is filled with so many unique characteristics and special rooms."

The house was designed by Hinsdale architect W.G Barfield for a Mr. W.E. Smith of Chicago, according to the blueprints that were passed down from the home's former owners, Dan and Joy Ives. Barfield is best known here for designing the Hinsdale Theatre building at 29 E. First St. (now Egg Harbor) and the First National Bank of Hinsdale building at First and Washington streets (now Marcus).

He also designed other homes in town, including his own home at 136 S. Oak St., which he built in 1912, according to his biography on the village's website. He later moved to 112 N. Lincoln St., where he remained for the rest of his life.

"Unlike his contemporary, R. Harold Zook, Barfield was drawn to the simplicity of the Craftsman and Prairie styles for his house

In a short piece he wrote for The Hinsdalean in March 2010, Dan Ives wrote about how he and his wife had long admired the house before they moved in and how they discovered "who was responsible for the enduring beauty and functionality."

"While arranging our belongings in those first few days, we discovered, tucked in the back of a closet, the original blueprints for the house," Ives wrote. "Written on the bottom was 'W.G. Barfield, Architect'."

Ives went on to make a hobby of searching for Barfield structures, with historical documents showing he designed more than 150 buildings.

Bingham said she appreciates the Ives' focus on preservation and the detailed introduction to the home they provided to her family.

"They were so awesome and so gracious," Bingham said. "After we closed, that weekend after, they sat down with us for an hour and a half to go over all the aspects of this house and how things work."

Bingham, whose previous home was built in 1934, said she appreciates that historic homes can be a challenge when it comes to upkeep. Her new abode has not been.

"Because this house was preserved so well and taken care of so well, it doesn't present those challenges," she said. "That's awesome." 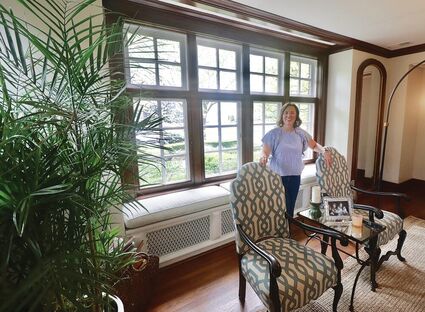 While some might think a family with four kids and three dogs is not a good fit for a historic home, Bingham disagrees.

"I thought, 'Hey, we are going to fit perfectly into this house,' " she said.

Piper enjoys living in the room that once served as the maid's quarters.

"It's really cozy because it's so small," she said. "It's just really cool."

The desire to tear down a historic home is one Bingham finds difficult to understand.

"I think they tell a story and they have so much history behind them," she said.