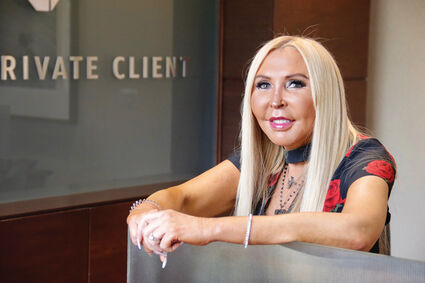 Carrie French said her job as a private client advisor at J.P. Morgan comes down to one purpose - helping people. (Jim Slonoff photo)

What does it mean to be recognized by Forbes?

When Carrie French entered the world of wealth management, she was in a field dominated by men.

"When I started, I didn't even know any female financial advisors," French said. Times have changed.

Twenty years later, French has a female boss whose boss is also a woman. Earlier this year, French became one of 29 J.P. Morgan Wealth Management advisors to be named among Forbes' 1,000 Top Women Wealth Advisors for 2021.

Seeing how far women have come in the field of wealth management brings up a lot of emotions for French, who has worked in the Hinsdale office of J.P. Morgan Wealth Management for 12 years.

French was working in management for a weight loss company when she heard a financial advisor speak at a seminar. The speaker talked about the impact a financial advisor can have on a person's quality of life. She knew right away that she had found her next career path.

"Investing and saving money isn't about being rich," French said. It's about planning and saving systematically, whatever a person's income level.

French said she wonders how different things might have been if her mother, who became a widow at 39, had someone to guide her financially.

"I wish she had someone she could talk to," said French, who now aims to be that person for other peoples' mothers, fathers, grandparents and children.

French's clients range from young people making plans for the decades ahead to older adults enjoying retirement. Working as a private client advisor, French helps each client discover and meet their financial goals.

"My favorite thing to do is goals-based planning," French said. Those goals vary greatly from client to client. While a pair of new parents might be focused on a college fund, empty-nesters might want to travel, purchase a vacation home or set themselves up for retirement.

One young man recently came to French for help saving for an engagement ring. When his goal was met, he sent her photos.

"It's so rewarding," French said.

French said couples often don't spend enough time discussing their financial goals. Until they sit down with her, some have never explored the subject. She encourages couples to talk about their money and what they hope to do with it, whether that's an early retirement, a bigger house or money for the kids.

"It's good to talk about it sooner than later," she said.

French said she is proud of where her industry has gone in the last two decades. Once alone as a female in her field, she's now surrounded by women who are using their skills and expertise to help others navigate the financial world.

"It's hard to see yourself in a role unless you see other faces that look like yours there," French said.

She said being recognized by Forbes was a validation of the role she's played in making her clients' lives better - and in making the world of finance a little friendlier for females.

"It just means so much to be recognized," she said.