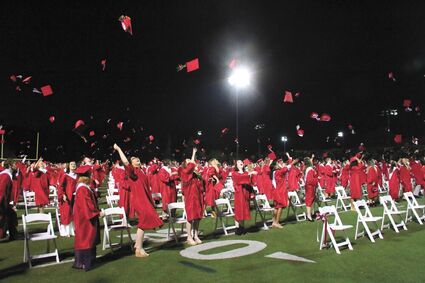 It's hard to say.

"It's been challenging because we've been planning everything with three scenarios," said Heather Bereckis, superintendent of parks and recreation for the village.

The region is currently under Phase 4 restrictions, but Gov. JB Pritzker said Tuesday the state is "making progress" in its coronavirus metrics and could enter the bridge phase of its reopening plan soon - maybe within a week.

"Every single event, every single program we have has contingencies depending on where we are at," Bereckis added. "We've been doing it for almost a year now. If it's a step forward or a step backward, we've got all the plans in place."

After a successful season last year, the Hinsdale Community Pool is slated to open May 29.

"We were able to open the pool last year with no issues," Bereckis said. "We actually had no instances of (COVID-19) being spread at our pool last summer."

Other outdoor summer staples like Movies in the Park and Lunch on the Lawn will take place this summer, along with Unplug and Play events and a new monthly book walk that launches next week.

"I'm super excited about these book walks," Bereckis said. "Between the (Hinsdale Public) Library and myself, we worked really hard to get these together."

The fate of one of the biggest events of summer - the Independence Day parade - is still up in the air.

"We have to wait to know if we're in the bridge phase," village manager Kathleen Gargano said Tuesday. "Today Pritzker said Illinois is making progress. If it's permitted, we would love to provide that to the community."

If allowed, the parade will take place on Saturday, July 3. Some of the bands and other acts the village hires likely would not be part of the procession, given the event's uncertain status. And the Downers Grove parade, which draws many of the same for-hire performers, will not take place.

"There are a lot of communities around us that are canceling theirs," Bereckis said. "Hinsdale likes to do things differently. We opened the pool last year, we had outdoor dining - so you never know."

As for outdoor dining, the village board last year approved an ordinance extending it through June. Village President Tom Cauley announced at the last village board meeting that trustees are likely to extend that through the end of the year, Gargano said.

"It will look largely the same as it did last year," she said. "We received a lot of positive feedback and we have been sensitive to the needs of the retailers and the restaurants so if there were issues, the police department worked with those businesses to address the concerns."

Another popular summer event that is contingent on the region moving out of Phase 4 is Uniquely Thursday. The weekly concert series sponsored by the Hinsdale Chamber of Commerce had to be canceled last summer.

"Uniquely Thursday is still on hold," Claudia Thornton, marketing director, said. "We've delayed the start to June 24 and carried it out through Aug. 26, but of course we can't do anything until the village approves."

The tent and stage are ready to go and the bands are lined up, with the Millennials set to be the first performer, said Eva Field, chamber president and CEO.

"Once we get the OK, then we'll shout it from the rooftops," she said. "We gotten a lot of inquiries - calls and emails - asking if we are going to move forward. People are really ready for it and looking forward to it."

Hinsdale Central plans to bring back two in-person events it had to cancel last year due to the pandemic.

Students are looking forward to the Red Devil Prom Gala Saturday, May 1, at Dickinson Field.

"We tried to find an event that was going to be on campus where people could participate if they wanted to," Central Principal Bill Walsh said. He credits Sally Phillip, activities director, and parents for planning the event.

The two-hour event will include a Red Carpet entrance, photo stations, a Class of 2021 memory project, a trackless train ride, music, themed raffle baskets and performances by mind reader Jacob Mayfield. Senior superlatives will be announced along with Prom King and Queen. Some 250 tickets had been sold as of Wednesday, Phillip said, and they will be available at the door.

After creating a virtual graduation ceremony last year, the school will hold an in-person event, again at Dickinson Field. Students will sit on the field, six feet apart, and chairs will be added to the track to increase capacity so at least two people from each graduate's family can attend.

Organizers are still figuring out some details, such as how to handle people who are fully vaccinated and students on quarantine.

"I think we're closer than we were three weeks ago and I think we'll get a lot closer May 17," Walsh said.

Students are very enthusiastic about the plan, he said.

"Their number one priority was to graduate on the field with their classmates," he said.

Senior awards will be handed out on the field the next day. Walsh said administrators also have been working to get all students vaccinated. He said he's ready for summer to begin, as it feels like last year never ended.

"That's how it feels, like it's been two long years," he said. "I'm looking forward to at least a week off."

What phase are we in?

Illinois has met several of the requirements to move to from Phase 4 to the bridge phase, with 70 percent of the population 65 years and older having received at least one dose of vaccine. Fifty percent of those 16 and older have received at least one dose as well, which is a requirement to move to Phase 5. Death rates have shown no significant change and average ICU bed availability is just above the threshold of 20 percent.

But other metrics have yet to be met.

New COVID-19 hospital admissions trended upward from March 28 to April 21, and the number of hospitalized patients has been on the rise since March 30. Both those trends need to reverse before the bridge phase will open.

29 — Pool opens for the season