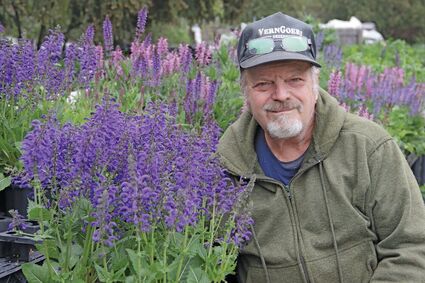 Dan Kosta, horticulturist at Vern Goers Greenhouse in Hinsdale, enjoys advising customers on, for example, caring for these salvia perennials or on the importance of putting a cage in place before a tomato plant gets too big. (Jim Slonoff photo)

What are some gardening tips for the season?

Amidst the social barrenness wrought by the pandemic, a bumper crop of new at-home gardeners has sprung forth.

"They're thinking, 'I'm not sure if I can get good vegetables this summer - let's grow our own!' " related Dan Kosta, horticulturist at Hinsdale's Vern Goers Greenhouse.

Backyard produce is hard to beat, he said, and a blooming flower bed outside the window is a visual feast. But knowing what to plant and how to care for it can be the difference between a flourishing scene and a wilting landscape. Rule one is read up on the varieties being considered for guidance on space requirements and location, Kosta said. Often people purchase more than they can accommodate.

"I see someone carry out a tray of 30 plants of tomatoes," he related. "I think, 'Do you have a

Flowers and vegetable plants need room and sufficient sun exposure. The soil should be prepared with fertilizer before planting - "If you want to grow good plants, you've got to fertilize," Kosta remarked - then mulch laid down last.

And resist the urge to plant too soon, as the Chicago area can experience a frost as late as May.

"If you put a nice bunch of marigolds or lobelia out in your garden, and it ends up that we get a frost at night, they're going to die," Kosta stressed. "Timing is everything."

Keep those flowers inside, well-watered and in a sunny spot, until the coast is clear, he advised. Recognize that what's blooming in April will not be in a couple of months.

"People come now, they buy everything that's in flower, and then come end of June they're in here hollering at me because there's nothing blooming in their perennial garden," he said

For vegetables, especially tomatoes and peppers, Kosta emphasized planting in different spots within the garden each year to keep fungi from taking root in the soil.

"If you move (the vegetables) every year, you don't build up a lot of it," Kosta said, adding that heirloom tomato varieties are popular for their taste, but can also be more susceptible to disease.

Another nemesis for gardeners is chipmunks. Repellents can work, Kosta said, but they, too, should follow a rotating system.

"Never use the same repellent over and over again, because they get used to it," he advised. "Some people like to do organic, some people like synthetic."

Raised beds have become popular but can be a bigger investment than expected.

"The wood is cheap. Then they come here and they find out that it's going to be $350 worth of soil," he said.

Finally, don't be afraid to get counsel from greenhouse staff, Kosta underscored.

He loves to hear when his counsel bears fruit.