Ten teams set to compete in new 'summer' season, with state finals offered for some 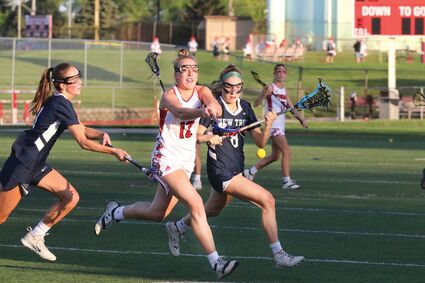 The Hinsdale Central boys and girls track and field teams were able to compete at a few indoor meets last year before the season - and the seasons for all spring sports - were canceled due to COVID-19. The teams are competing this year in the new "summer" season, which runs into June. (file photos)

High school athletics has looked much different this school year, with COVID-19 restrictions moving sports from one season to another, limiting spectators and reducing the number of competitions.

That trend continues as 10 Hinsdale Central teams begin this year's "summer" sports season. Five of those teams will have the opportunity to compete in state finals in June - baseball, softball, girls lacrosse, and boys and girls track and field.

This is the first in a three-part series of team previews that will continue April 29 and May 6.

Strengths: Our strength area is definitely on attack.

Challenges: We're returning two starters from two years ago. We have three kids that have played at varsity this year. That is going to be our issue this year - catching up and getting everybody ready to play at that level. We've got the skill we need, it's just getting them to play at the varsity level and getting them the experience they didn't have last year.

Who to watch: Jack Salerno, he's a big attackman who takes up a lot of space but has very quick handling. Finn Little is another attackman who theoretically should be the leader of our offense. He's fast. He makes decisions real quick. Ryan Murphy, a senior, is one of our midfielders - probably the best shot on the team. Tristan Moncrief is a junior captain who is one of the best face-off guys we'll see in our league this year.

Outlook: I think we'll do better than we did two years ago. I think we have 18 games. I'd like to see us in that 13- 14-win category. If we can get up to speed quick enough, I think that definitely can happen.

Strengths: There's a lot of them. I think that the senior leadership is really nice. I think that's helpful for a lot of our younger girls on the team. In the past, we would have a Michael Jordan and a Scottie Pippen on the team. This year we don't have a Jordan and a Pippen, but I believe the entire team is on that same solid level. This is probably the toughest group I ever coached. I coach football, too (varsity wide receivers and special teams), and I think this group is tougher than any football team I've coached. This group has a level of assertiveness they bring to the table. It's just that type of group. The strength of this team is their grit and toughness, for sure.

Challenges: I think a lot of other schools are going to face a similar challenge. We didn't have a season last year. I think it kind of hurt some of the kids we brought up last year. We have a lot of sophomores on the team this year. The sophomores are probably going to be the surprise of the team. The fact that the sophomores haven't had that high level of competition - that's something we need to get them ready for. I think I have six or seven sophomores on the team and they are freakin' good. By the time mid-May rolls around, I think they will be ready to go fully.

Who to watch: We have Charlotte Callahan, she's a senior midfielder. She's committed to Yale University on a scholarship. She is going to be pretty special to watch. We also have Annette Ciupek, she is a junior. She committed to the University of California recently. She's a midfielder and she will be exciting to watch also. I also have another defender, a senior, Sophia Buzelis. Long, extremely tall, extremely fast, extremely tough. She's going to Furman University on a scholarship and she's one of our senior leaders right now. She could play midfield as well. I think she's one of the most versatile players in the state of Illinois. She's going to be another one to keep an eye on.

Outlook: I think the ceiling is the sky. We could go all the way. We're that good - we're that tough. If I'm not mistaken, we're ranked third in Illinois behind New Trier and Loyola. We have a tough game our first game against York. York is a good team. Our girls are not taking this lightly. We're practicing pretty hard for this game. My prediction is we'll make it down all the way in some capacity, whether it's the final four or the state championship. I see us going that far. They deserve (a state finals) because they got that taken away. Fall and winter last year had playoffs, and spring didn't even have a season. They really got gypped. They deserve it and we're excited for it.

Furthermore: I'm just really looking forward to the season. We're kind of underdogs this year and we like that fact. We're excited and we're ready to play.

Strengths: I would say we've got some experience - we're fairly senior heavy. We've got some seniors that had strong seasons as sophomores. Obviously last year was a moot point.

Challenges: The obvious - just being able to not be impacted by quarantine or exposure (to COVID-19). That is the single biggest challenge. And I think just getting back in the swing of competing again is going to be a challenge. I think it's going to come naturally for all the guys. Once that second meet actually happens, it will be good. They just don't know where they're at. I've got some sprinters who haven't competed since a year ago January.

Who to watch: Dan Watcke, a sophomore, he's a middle distance kiddo. Colby Revord is another, he's a junior and he's really starting to come into his own. He's another middle distance kid. Eli Sobecki, he's a senior hurdler, I think he's going to have a good season. Isa Hitchens, he's also a senior, a very good returning sprinter. Joey Morris, he's also a senior who's an accomplished sprinter. He's playing soccer by the way right now.

Outlook: I think it will be important that we're able to get to compete consistently. I'm not really terribly concerned about how we do overall. It's just getting opportunities. the coaching staff and kids alike are looking forward to competing again.

No. team members: 85 at all levels

Strengths: We have some sprinters and then our distance girls. We have some awesome young kids that didn't get a chance to prove themselves last year. Some of those girls have been running with us on the upper level since they were freshmen. We're happy with the amount of girls we have out for track. I think it's good these girls are still getting a chance to compete and have some goals to work toward. They're really good kids. They are focused, they are working hard. You can't ask for more than that.

Challenges: Just the fact that obviously we don't have the time allotment this year that we've had in the past in regards to different level meets. Most of our meets this year are going to be triangular meets. We don't have a lot of meets to get ready for the so-called conference, sectionals and possibly state. In the past, we had a full indoor season. We are kind of a young team. The main components of our team are junior girls.

Who to watch: We have one distance girl that is obviously very good, sophomore Catie McCabe. Then our sprinters - junior Annette Sommers; junior Karina Shtogryn; senior Kendall Griffin, she's a hurdler and a sprinter; and junior Erin Milligan, sprinter/400 meter.

Outlook: I think in a tough conference, we could finish anywhere in the middle of the pack - not knowing what everybody else has out there right now. If we progress to where we're at our best at the end of the season, I think we'll do pretty well. I think our best chance to score at the state track meet will be with Catie McCabe. Catie was quarantined for 10 days because she was in a classroom with someone who had COVID. Some kids like Kendall will probably score for us in the hurdles at the conference meet and possibly sectional meet. We're putting together a 4x400 meter team that could - if they peak at the right time without injury or sickness - possibly make it to the state meet. 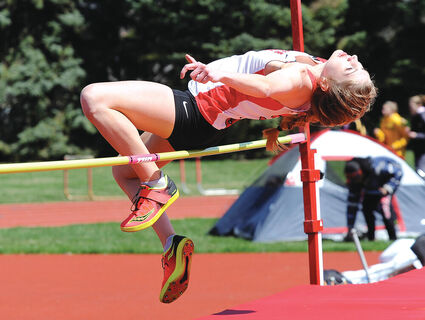 Furthermore: James Conyers, my assistant coach, has been filling in for me (during the spring football season) and doing a great job. James has been training our girls since the off-season.