Father and son podcast help generations speak to, not past, one other 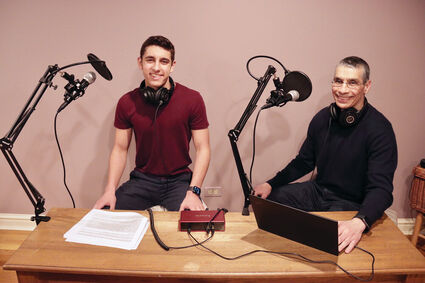 The Hold Me Back podcast hosted by son Aidan ElDifrawi and his father, Ash, is designed "to model a new way of how our generations can try to communicate with each other," Ash said. They record an episode every two weeks on topics such as youth sports, swearing and money. (Jim Slonoff photo)

What do you get when you put a Gen Xer and a Gen Z member in a room with a couple of microphones? A pretty engaging podcast, as it turns out.

"I like to have a good debate, and I take a lot of joy in just talking through things," Aidan, a Hinsdale Central sophomore, said of the endeavor. "Especially with my dad, where we don't always see eye to eye on things."

The episode on the pressures surrounding youth sports, for example, revealed their contrasting perspective on the subject, with Ash seeing Aidan's continued involvement in competitive swimming as vital to his development and college admission prospects, and Aidan wanting to direct his energies elsewhere. The gave their opinions honestly to help the other understand, but not necessarily adopt, their point of view.

"We thought we could model a new way of how our generations can communicate with each other using facts and data and compromise on politically charged topics rather than just try to convince the other that you're right," said Ash, who works in marketing and is also a clinical psychologist.

Aidan actually heard from another dad how the ElDifrawis' podcast discussion altered his mentality when it came his interaction with his daughter over taking her to the batting cage for training.

"He said, 'I'm going to ask her if she wants to do this, make sure it's OK with her," he recounted. "That was really cool that this was actually coming into people's minds and affecting the way they think."

Listening to an episode, it's clear the two do their homework. They cite articles and experts in espousing their arguments to ensure the exchange is grounded in reason, not ranting.

"I think the combination of the research and the vulnerability and the honesty" are compelling for people, Ash said.

They wrap each session with a "You convinced me ..." segment where each shares a way in which his perspective has been broadened.

"We intentionally put that in to make sure we both came into (the episodes) with an open mind," Ash said.

Aidan floated the podcast idea toward the end of last summer, with societal divisions on the pandemic, racial justice and the presidential election on full display.

"We noticed how difficult it was for people to have healthy discussions that weren't about just trying to convince the other person you're right," Ash said.

They took the plunge at the start of this year, purchasing mics and finding an acoustically appropriate room to record.

"We spent a lot of time learning about it," said Aidan, a fan of podcasts who also got Ash hooked.

They resolved that it would be a resource others would find worthwhile.

"We decided if we were going to do something, we wanted to do something that's meaningful and has good quality and has a significant amount of research behind it," Ash said

They had not counted on the 10-15 hours needed to prepare an episode, from research to recording to the time-consuming editing process.

"It takes a lot of time. There's so much to sort through out there," Ash said "That has been most surprising to me."

Aidan said he had to make peace with hearing himself.

"That was the hardest part for me, being able to actually listen to what you're saying and getting over the insecurity of hearing your own voice," he commented.

They say their talk on swearing prompted each to modify their behavior. Their sign-off to the episode illustrated their humorous sides.

"As long as I can keep calling you a dumb-a**," Aidan joked.

They expect upcoming episodes on money and grades to stir up their listeners. And that's OK

"To really do this right, we have to be open, honest and vulnerable," Ash said. "In a community like ours, there's real risk to that.

"If the whole point of this podcast is to bridge this divide, and if we don't model open and honest dialogue, then what's the point?" he added.

They both get regular feedback from friends and neighbors. Ash said their audience is bigger than they realize.

"We became the 13th-rated parent podcast in the country in a week," Ash said. "The reviews have been humbling."

"I want it help people have a new perspective on things and understand that other people think differently and have a different point of view," he said

As for the Hold Me Back moniker, it refers to Gen Z's feeling of being stifled by Gen X. Ash has come to see some truth in that.

"I think that our generation is potentially holding this generation back," Ash confessed. "All the things we think about as convention I think are outdated."

Aidan wants to unleash a new spirit of openness.

"I'm just happy to be inspiring debate," he said.