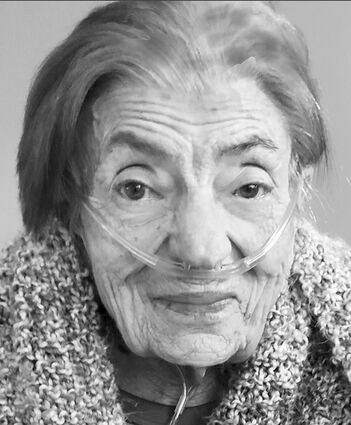 She lived a long life that was, at times, extraordinary. At age 11, during World War II, Irma and her family were forced to flee their home in Poland, crossing the border into Germany on foot. In 1951, at age 23, Irma made the tough decision to leave financially-ravaged, post-war Germany in hopes of finding steady employment. She bravely sailed the Atlantic for America alone in steerage, becoming ill along the way. Once in New York for immigration processing, she tenaciously fought to keep her one, not-so-meager possession: an exquisite, golden coffee pot she'd scrimped and saved to buy to bring with her to America.

Irma began her new life speaking virtually no English. But that didn't stop her. She learned along the way, first as a housekeeper in Madison, Wis., and then as a seamstress in Milwaukee. She worked hard, saved and occasionally socialized with fellow German immigrants. That's how Irma met her man. She'd say Adolf 'Ady' Schneider appealed to her because he was neat and well-dressed, like herself. It led their friends to refer to them as "the Zwillinge" (the Twins)! They married on Oct. 1, 1955.

Soon, their three children - Monica, Bertram and Karen - became the center of Irma's daily life at their suburban home in Wauwatosa, while Adolf made the dough (literally, as head pastry chef for the exclusive Milwaukee Athletic Club).

But "determined Irma" was the family glue! A church-going, self-taught superwoman, she made meals on a dime, baked killer peanut butter-chocolate chip cookies; sewed designer-level outfits for her two daughters, their dolls and herself; helped her son deliver early-morning newspapers; kept a spotless home; did much of the yard work and even became proficient at furniture refinishing. Over the years, Irma's determination also saw her proudly become a U.S. citizen.

And along with her bravery, it got her through a quadruple bypass at age 75, and then, in her early 80s, steeled her to personally care for Ady until his 2011 death from Alzheimer's.

Irma eventually moved on again. At age 89, she tried out apartment living in beautiful Oconomowoc, Wis. But then, following a hip fracture, she made one last move - this time to Illinois, to live with her daughter, Monica. In June of 2020, at age 92, Irma became a Hinsdalean.

As she faced her final challenges, as always, she didn't give up. She tried hard each day and found happiness in the moment. She reveled in the simple things: hugs, kisses, laughter, music and smiling.

Irma is survived by her three children: Monica, Bertram and Karen (Andy) Rhodes; and her four siblings, Helga, Friedhelm, Waldemar and Berthold.

She was preceded in death by her husband, Ady; her siblings, Lilli, Olga and Adolf; her parents, Wanda and Gottlieb; and her aunt, Maria.

A funeral Mass will be said at 11 a.m. Saturday, April 24, at Notre Dame Catholic Church, 66 Norfolk Ave., Clarendon Hills. Due to current health restrictions, guests are asked to wear masks and follow social distancing. The service also will be livestreamed; visit https://www.powellfuneraldirectors.com for the link.

At 2 p.m. Sunday, April 25, pink balloons will be released in honor of the 93rd anniversary of Irma's birth. (The family invites anyone so inclined, wherever they may be, to also release a pink balloon in Irma's honor.)