Series: Battle of the boards | Story 4 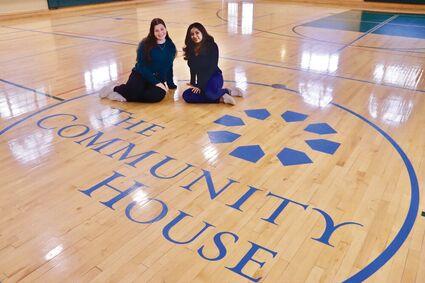 Camryn Saltzman and Bhavana Dronamraju are co-presidents of The Community House Junior Board, whose members help organize and volunteer at events such as the upcoming Walk the Walk for Mental Health on May 23. (Jim Slonoff photo)

The Community House is a place Hinsdale's Camryn Saltzman has grown up with - from preschool camps to Jodie Harrison basketball to Fortnightly.

"In middle school I participated in the volunteer camp here," said Saltzman, a senior at Hinsdale Central. "I became a camp counselor for that after a few years of being a camper."

Through that experience she got to know Marcie McGonagle, the former volunteer coordinator at The Community House, who talked to her about joining the nonprofit's junior board. Saltzman joined her freshman year and is currently serving her second year as co-president.

What part of being on the junior board has brought her joy?

"I think for me just really the opportunity to give back to my community, because I've learned to love that and volunteering," she said. "The Community House in particular has given me so much over the years."

Bhavana Dronamraju, a Hinsdale resident and junior at Central, is in her first year as co-president. Like Saltzman, she found the junior board through another Community House program. She became a volunteer at After the Bell, an after-school program for elementary school students, after moving here in sixth grade.

"I wasn't very involved in the community. I wanted to be involved," she said.

With McGonagle's urging, joined the junior board her sophomore year.

"Once I joined the board, there were more different opportunities and more ways for me to be involved," Dronamraju said, noting she still volunteers with After the Bell.

Sophomore Maggie Risinger of Hinsdale, the board's administrative liaison, is following in the footsteps of family members in supporting the agency.

"I was really interested in being part of it because it runs in my family to be part of The Community House," she said. Her dad served on the board of directors and her two older sisters on the junior board.

"I also wanted to give back to my community as well, and I found the junior board was a great place to do that," she added.

Being part of the board during the COVID-19 pandemic has been a challenge, but it also has given members the opportunity to connect during a time of isolation.

Dronamraju said furthering those connections will be her priority next year. She also wants teens - from Central and nearby public and private high schools - to know all are welcome.

"I want to be sure that people can know that we are approachable and we are always here to talk and that is definitely the No. 1 goal for next year," she said.

Both co-presidents said they have grown in the role.

"I've learned a lot of leadership," Saltzman said. "Serving in the role of president, I've gotten to know a lot more people and a lot more community members. It's really helped me see everyone has differences that can be used for the better in different ways to give back."

"I think for me, being president is teaching me a lot of things I didn't know about myself," she said. "I'm a very outgoing person, but when it comes to leading meetings, I get nervous."

Saltzman also is president of the HCS Family Services Junior Board this year, which puts her in an interesting spot during the "Battle of the Boards" food drive competition currently underway. Since the HCS food pantry is the beneficiary of the drive, it's a win-win situation for her. The Battle of the Boards also is helping to raise awareness among her peers.

"We're realizing how many great nonprofits there are in Hinsdale," she said.

The three agreed that in many ways, volunteering is its own reward.

"It just feels so good when I volunteer with The Community House Junior Board because I know I'm giving back to my community and giving to the communities around me," Risinger said. "I would encourage everyone to join it because it's so fun and we meet new people all the time."

Beth Hahn, program director at The Community House and liaison to the junior board, said the agency is grateful for the teens' help - especially at events such as Walk the Walk and programs like Willowbrook Corner.

"The junior board just brings that sense of community to our house, The Community House," Hahn said. "They are a remarkable group of kids that want to make a difference."

- Seven junior boards in Hinsdale are currently working in partnership with The Hinsdalean on a seven-week food drive to benefit HCS Family Services (see the ad on Page 23.)