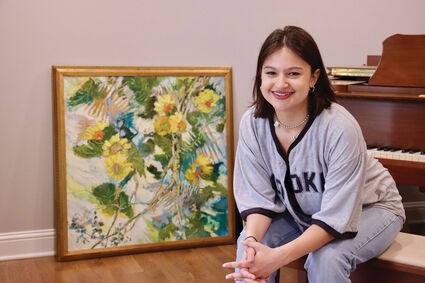 Poet Ellie Pena said poetry can be intimidating. But she encourages anyone who is interested to give the artform a try. "Modern poetry isn't Shakespeare," she said. "It's really not as scary as everyone thinks it is." (Jim Slonoff photo)

What about poetry inspires you?

Ellie Pena's lifelong love of poetry began with a gift from her grandmother.

"My mom would read it to me before bed," Pena said of Caroline Kennedy's anthology of children's poems. It wasn't long before Pena began penning her own poetry - at age 8.

"They were just simple verses," she said, but even then, her subject matter was focused on change. Pena's first poem was about the slaughter of wild horses in the mountains of Wyoming.

Awareness of and advocacy for the world around her remain frequent topics of Pena's writing, but these days, her verses seldom rhyme. A fan of slam poetry, Pena gravitates toward a more fluid style of poem than the ones she enjoyed as a child. She describes slam poetry, or spoken word poetry, as similar to rap, but without the musical beat behind it. And like rap, this freeverse form of poetry often takes on serious topics. A member of the Hinsdale Central Speech Team, Pena's piece addressing sexual assault in the military qualified for sectionals this year.

Slam poetry is written to be performed rather than read. Pena performs both as a member of the school's speech team and in slam poetry competitions such as Louder Than a Bomb, the largest youth poetry festival in the world. With the annual Chicago event on hold this year, poets from Hinsdale Central and other schools plan to gather via Zoom April 27 to celebrate National Poetry Month and share their latest pieces.

Pena also fosters her love of poetry as co-president of the Hinsdale Central Poetry Club. A club of about 30 members, these fellow wordsmiths gather regularly to challenge themselves as writers and thinkers. Meetings typically include a time for members to share their work, as well as a prompt for a writing session. At a recent meeting, members were charged with writing a poem about the color red without using the word.

The supportive nature of her fellow poets is one of the many things Pena said she loves about the artform. Even during slam competitions, poets encourage one another, she said, recalling a time when she forgot a line on stage and was empowered by her fellow competitors to carry on.

Seeing her favorite artform brought to the forefront during the 2021 presidential inauguration was encouraging and inspiring for Pena.

"It was just beautiful," Pena said of the performance and message delivered by Amanda Gorman. "To see it on an international stage was amazing."

Pena said poetry has provided her an outlet for her thoughts, emotions and creativity. It's brought her in touch with like-minded people and exposed her to issues, cultures and experiences that she might not otherwise have encountered.

Ideas for poems can come at any place and at any time. Sometimes, a single line will repeat itself over and over in her head before becoming the inspiration for a written creation.

"I'll have a thought, and then the thought will turn into a poem."

Poetry has always played an important role in Pena's life, as a form of expression, a means of catharsis and a connection to other people.

"When people share their poetry, they're very much sharing parts of their souls," Pena said. "It's truly one of the greatest things I've ever been a part of."