Hinsdale was love at first sight for Seman 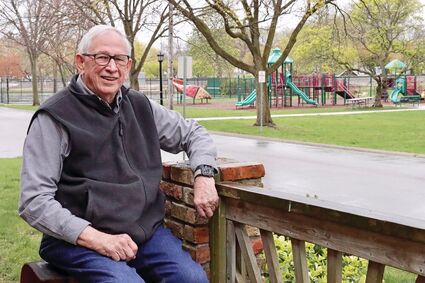 Stewart Seman was stuck in rush hour traffic on Route 83 one day while driving from the northern suburbs back to his Calumet City home. That's when he got his first view of Hinsdale from the roadway's bridge and was instantly charmed.

"I could look down into Stough Park. There was the train station and the park and the kids running around," he recounted. "It was like in a dream, seeing this beautiful place."

Shortly thereafter, Seman and wife Mary relocated to the village ­­- in the Stough Park neighborhood, of course. He has served as de facto caretaker of Stough and nearby Ehret parks over the decades, a model of environmental stewardship as the country marks Earth Day.

He even enlisted his five children in the effort, filling bags with empty bottles from illicit teen drinking sessions.

"When they were younger, I could get them to pick up trash in the park," he said. "It was a family chore."

In winter, Seman would take advantage of the relatively unbroken strip of green space along the railroad.

"I get home from work, strap on the skis and be able to ski all the way to Ehret Park and back," he said.

Seman attended the University of Dayton through the ROTC program. After graduation he was commissioned by the U.S. Army and stationed in Cleveland as a personnel psychologist.

"I was in charge of the mental testing section," he related.

There he met a young nurse named Mary. They were married in 1967 and moved to Chicago the following year for Seman's job as an auditor for the U.S General Accounting Office. After settling in Hinsdale, he would hop on Metra at West Hinsdale station for his daily downtown commute until retiring in 2005.

His children are grown and moved away, but Seman enjoys watching other neighbor families progress through the same stages.

"We're the oldest people in the neighborhood east of Stough (Street)," he remarked, before adding with a smile, "not that it's a competition or anything."

In addition to his park beautifying efforts, he has lent a hand to youth trying to master two-wheeled transport.

"The kids come out and ride their bicycles around there," he said, gesturing to an overgrown gravel ring in Stough Park that was once a running/walking path. "In the past I helped several kids learned to ride a bicycle on that path."

Seman is thankful that he's on the receiving end of help these days from neighbors "taking care of the old folks" by clearing their driveway of snow. He's also grateful that the days of lugging multiple bags of booze containers out of Ehret Park are over, though he noted the more recent hazard of discarded railroad materials.

So what does Earth Day mean to Seman?

"I do a pretty job of keeping it clean without having a special day set aside for it," he said.