Central actors enjoying working on spring musical, even though much has changed 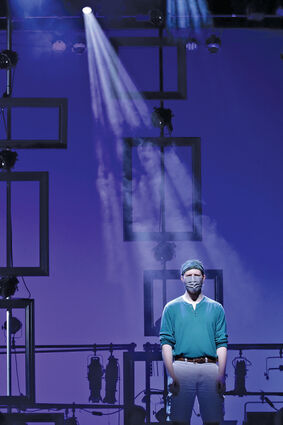 Senior Joshua Budziak performs "Great Expectations" from the musical "The Theory of Relatively" last week before an empty auditorium while junior Ann Ascher (left) and senior Lexi Klein sang their duet, "The End of the Line." Because of COVID-19 restrictions, the show was filmed last week and will be streamed April 30. (Jim Slonoff photos)

For Hinsdale Central senior Jessica Miller, the school's spring musical, "The Theory of Relativity," resonates in more ways than one.

"This show is really cool because it's about a bunch of different stories that are kind of strung together," Miller said. "It's really nice in this time of COVID, because we are able to work on a lot of things individually and bring them together."

The closing song, "Nothing Without You," reflects the current emotional state of many people.

"It just kind of shows that we all need each other, and I think it's really prevalent when we all feel separate right now," she said.

Senior Quintin Craig of Clarendon Hills said one of the songs he sings speaks to him as well.

"It's a really well-written song lyrically and I really love it," he added.

Students were not familiar with the show when it was first announced, Craig said, but quickly became fans.

"As soon as we started listening to it and actually reading the lyrics and script, I think everyone fell in love with it," he said.

The 2016 one-act musical was chosen in January, director Susie Jaffe said, when no one could predict what life would look like in the spring.

"We had no idea what the safety restrictions and COVID guidelines were going to be in April," Jaffe said. "A lot of it felt like flying in the dark."

She and her colleagues learned, for example, that students were not allowed to sing for more than 30 minutes at a time.

"We had to change the way that we did every rehearsal. Most of the rehearsals took place over Zoom with a couple of really big vocal rehearsals," Jaffe said.

She credited music director Peter Bromann, who joined the production this year, for his ability to teach students brand new music virtually.

"Peter is so skilled at building energy behind a show and excitement and connecting with the students," Jaffe said.

Concerns about students singing in masks and the close contact required to use body microphones led to a decision to record all the music ahead of time. Last Thursday and Friday, students performed the scenes for the camera. Now it's the job of Jaffe and her team to put it all together, a process that is requiring hundreds of phone calls.

"I basically have had to reimagine every element of live theater for streaming," she said.

The crew had to work differently as well. Senior Nathan Brooks of Clarendon Hills, who has been working backstage since his freshman year, said the need for social distancing made it tough to bring in students to work on lights and the set.

"We wanted to make it a safe environment," he said. "We didn't have too many people at one time."

Choreography also was affected by social distancing, and Jaffe said Melody Rowland created inspiring choreography in which students did not touch or come within six feet of each other.

One highlight of the process took place last Monday, when the cast gathered in the auditorium to run the show.

"Students got to see each other's work for the first time," Jaffe said. "That was really fun - to get some laughs and get some applause and get some response."

Senior Charlotte Froiland of Hinsdale, who sings "Julie's Song," said it was amazing to be back in the auditorium after spending weeks rehearsing online.

"The whole energy of the cast completely shifted and you could feel that it was more of a show and it was really coming together," she said. "It just really felt magical."

Not being able to have the response of a live audience is tough, Jaffe acknowledged.

"That is so much of why we do theater, to make an impact, to share a message and to get a response," she said. "It has been hard, especially at the end of a number where I have goosebumps. I think they just had the most amazing performance and the lights go off and it's silent.

"We keep telling them, 'Your applause is coming. It's just not today,' " she added.

After many cast members were unable to perform in the canceled "Seussical The Musical" last spring, this opportunity - even though a little different - is all the more sweet.

"I'm just really grateful we can have this. It's kind of nice it will be filmed, so we will have this token to keep and look back on in years to come," Miller said.

Brooks was happy to rejoin the tight-knit community he has come to rely on.

"I'm happy we get to put on a musical this year because it's a staple of the drama department every year," he said.

Craig said he wasn't sure the finality of this experience had hit him yet. 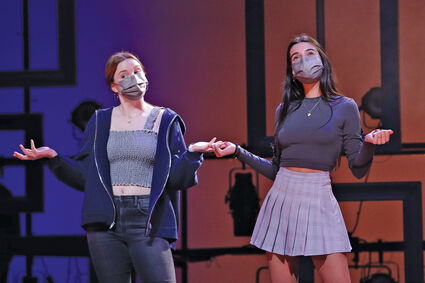 "I might get a little emotional today because I'm singing a song about leaving home and leaving everything behind for one of what might be my last times in this auditorium where I've spent the last three years of my life," he said.

The experience was also bittersweet for Froiland.

"I'm sad this is my last show because this drama club has meant everything to me these last four years. I'm just so happy I get to bow with the people I have grown so close to, and I get to bow with them on this stage," said Froiland, who is majoring in education in college and hopes to follow in the footsteps of Jaffe and assistant director Chris Kostro.

Tickets are $15, free for students, and available at https://www.showtix4u.com/events/hcdrama.