Series: Battle of the boards | Story 3 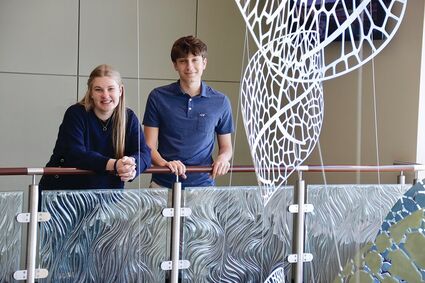 Hinsdale Central senior Alegra Waverley and Benet Academy senior Joe Mekhail are two of the Hinsdale Hospital Foundation Junior Board's executive board members. One of the ways the board supported the faith-based mission of the hospital this past year was to write letters to patients at the Amita Health Cancer Institute in Hinsdale. (Jim Slonoff photo)

Hinsdale Hospital Foundation Junior Board members learn important skills during their tenure - like leadership, service and communication. Over the past year, the board's executive committee has developed another area of expertise: adaptability.

"This year was definitely an adjustment, and we call it a lost year, a building year to restructure the way a lot of things are done on the board," said senior Alegra Waverley of Hinsdale, who serves as the communications and historian co-chair.

"We were just very resilient the whole year," said senior Joe Mekhail of Burr Ridge, co-president. "We were able to find new ways to still be engaged."

One of the foundation's signature events, the annual ice cream social, was one of many junior board projects that took on a new form over the past year. Rather than hold an event at Burlington Park, ice cream trucks visited different parks in town to spread out the crowd.

The event has been Mekhail's favorite since he joined the board as a freshman.

"This was my fourth ice cream social and it's by far the most rewarding experience because we were able to bring everybody together, not just the junior board," he said. "We meet different families who live in Hinsdale. Serving them and coming together for a good cause is something I always look forward to."

The junior board's annual project to make blankets for families in the hospital's NICU also was modified due to COVID-19. Instead of gathering as a group to tie the blankets, the executive board created kits for members to pick up and complete at home.

"It was just nice that we were able to continue such a great service without having everybody in the same room," Mekhail said.

One thing that has not changed over the past year is the opportunity to learn, Waverley said.

"For me, what I love is even when you're on the exec board, that's not where your growth stops," she said.

She cited a leadership workshop led by Adam Maycock, president and CEO of Hinsdale and La Grange hospitals.

"The experience that I gained and knowledge I was able to obtain from him was really insightful," Waverley said.

Learning to communicate with a group of 150 teens and delegating responsibilities are other skills Waverley has developed.

"I think I've really learned how to communicate with a wide group of people - especially not being in person," she said. "For me, I've always loved talking to people in person."

Service is underpinned by faith for all junior board members.

"We actually have a worship leader position on our executive board who helps to open each meeting with a prayer and set our intentions in what we're trying to improve," Waverley said.

Mekhail, who also is involved in the campus ministry at Benet Academy, said having another outlet for his faith was fun.

"Not only was it service, it was spiritual service," he said. "We knew we were serving others through God."

Junior board members often also share an interest in medicine, said Amita's Lyn Burgess, the hospital's liaison to the foundation. Mekhail and Waverley are no exception.

"I'm actually getting a bachelor's in science in journalism," Waverley said, adding that she would like to report for a hospital or big pharmaceutical company. Mekhail hopes to combine his interest in medicine and service in his career.

"I want to travel abroad and go to different places that have unfortunate health care systems and provide service there," he said.

Before they head off to college, the two are busy recruiting rising high school juniors to serve on the executive board next year. The board pairs one junior and one senior to work together in the various offices.

"It's a great system," Mekhail said. "It's consistent each year. It's rewarding to help somebody else so they are prepared."

The group was established in 2004 by Colleen Salvino with about 10 teens. Under Salvino's leadership, the group has grown to about 150 teens and is a valuable arm of the foundation, Burgess said.

"Our junior board is one of our crown jewels within the foundation," Burgess aid. "We're very proud of having all the kids serve as part of our junior board.

"As future leaders, what they learn during their tenure will impact them for a lifetime," she added.

She recalled a board member once describing the junior board as part of his family.

"I think that speaks to the type of group that we have," she said.

The Hinsdalean on a seven-week food drive to benefit HCS Family Services (see the ad on Page 27.)