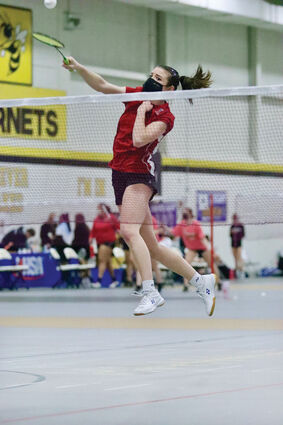 Angelia Berti and her partner Lily McCain (bottom, left) won their first three matches, including this one against Lockport, en route to a sixth-place finish.

The Hinsdale Central girls badminton team ended a season like no other, placing sixth at the state tournament March 30 and April 1 at Hinsdale South High School in Darien.

"I knew my No. 1 doubles team, Angelia Berti and Lily McCain, I knew that they were going to get a medal," varsity head coach Katie Maley said. "These girls went to state and did awesome as sophomores. I knew as seniors they were going to dominate and they really did. They had a huge upset against a Naperville North doubles team and a Fremd doubles team."

Undefeated this season, Berti and McCain beat teams from Lockport, LT and New Trier before losing in the championship quarterfinals to a Neuqua Valley team. Their victories against Naperville North and Fremd in the consolation quarterfinals and semifinals got them to the fifth-place match, where they lost to Rosana Liang and Emily Shih of Naperville North 10-21, 12-21 to capture sixth place. Naperville North ended up winning the state title with 18 points.

Berti and McCain are great communicators on the court, Maley said.

"They were truly two girls-one body, one mind," she said. "They moved in perfect harmony."

Berti said she and her partner genuinely

"We're friends on and off the court, and I think that definitely you can see that through our playing and it strengthens us a lot," she said.

Berti was "completely blown away" by winning a medal.

"I had been playing since fourth grade and it's what I've been working toward for many years. I was very happy," she said.

Competing two years ago at state provided an advantage, she surmised.

"I think it was really good practice for us. I think if we didn't do that two years ago, we wouldn't have had a chance this year," she said.

McCain agreed the experience gave them an edge.

"We knew what kind of level we needed to get to in order to win a medal," she said.

Having a season limited to conference matches made for a tough state meet, McCain said. They hadn't seen many teams since the state meet two years ago.

"We didn't really know how good they are this year, so it was a little nerve wracking going into it," she said.

"Sometimes we'd get out on the court - when we played New Trier at the state meet - and we were like, 'This is a lot easier than we expected.' "

In their first strip to state, the No. 2 doubles team of Maddie Maduzia and Alley Yang won their first round before losing to a what Maley described as a "sleeper" Libertyville team in the second round.

"Historically Libertyville doesn't have an amazing program," Maley said. "They were really good."

In the consolation bracket, Maduzia and Yang went on to beat their next three opponents before losing a close match to New Trier's Devlin Guthrie and Grace Yoon 17-21, 18-21.

Sophomore Jessica Han made it to the fourth round in No. 1 singles play.

"I was very happy she made it to the fourth round and I know she will be back for her junior and senior year and she will continue to make a name for herself and carry on the Han tradition for her family," Maley said, referencing Jessica's older sister, Angela, who helped the team place fifth at state two years ago.

Maley praised No. 2 singles player Anya Shah, who played No. 10 singles two years ago as a sophomore, despite a first-round loss to a player from Fremd.

"That was a really hard first match right out of the gate," Maley said. "She did awesome. She's a smart player. She really doesn't give up."

Shah rebounded to win the first round of the singles consolation bracket (bottom half) before losing to a Stevenson opponent.

Maley said she was pleased to win sectionals and qualify her two singles players and two doubles teams for state.

"I was unsure what this season was going to look like," she said. "It ended up being an awesome season. I am so happy we got to go to the state tournament. Six out of 56 in a weird COVID year is pretty good. 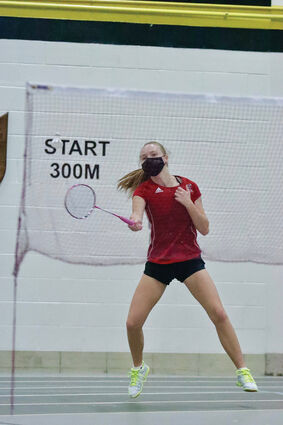 McCain said the highlight of the state meet was beating Fremd, which she and Berti needed to do to stay in the running for a medal. (Jim Slonoff photos)

"We are the first in-person state tournament that happened in over a year," she added. "That was a pretty cool statistic, and I was pretty happy to be part of that."

The pandemic did prevent spectators from attending the tournament. Berti said she and McCain were able to stay energized during their matches even if fans were not filling the bleachers.

"We had our teammates cheering from the sidelines the whole time and that definitely helped keep our morale up - and Coach Maley, she was there, too," Berti said. "She was going wild."

McCain said she's thrilled she and Berti were undefeated until they got to state and only lost two matches there - against very tough teams.