Junior board more than a pet project

Series: Battle of the boards | Story 1 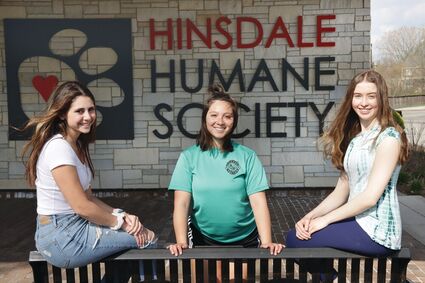 The community's rising generation has, in recent years, been stepping up into leadership roles with local nonprofit organizations through service on junior boards.

Seven junior boards in Hinsdale are currently working in partnership with The Hinsdalean on a seven-week food drive to benefit HCS Family Services (see the ad on Page 15.) The Hinsdalean will profile each over the next couple of months, leading off with the Hinsdale Humane Society Junior Board.

In early 2020 the board was organizing the Young Artist Night fundraiser at the Pet Rescue and Resource Center. But the grand plan was hitting up against the reality of limited means, revealed communications director Viviana Prado.

"We had to improvise, we had to make changes, we had to work around the clock with things that were happening," said Prado, a senior at Lemont High School.

One of those changes was using construction fencing as display stands instead of easels. The utilitarian vibe worked.

"I think it was one of the best events that I have seen," she said.

Jessie Wang, a senior at Hinsdale Central and the board's assistant secretary, remarked at the insight her four years on the board has afforded her.

"I really gained a better understanding of how nonprofits work and how the organization has to include all these moving parts to run smoothly," Wang said.

Fellow Central senior Sam Gonzales, digital/graphics director, noted that board responsibilities don't normally entail working directly with the shelter's animals. But seeing the fruit of their labor with a successful adoption is rewarding.

"I just think that's the sweetest thing in the world," Gonzales said. "The person adopting them is always so happy."

Prado was attracted to the humane society junior board's empowering partnership with teens.

"It was one of the only junior boards that allowed you to get involved without any sort of parental (involvement)," she said. "It could be just my responsibility."

The board is comprised of 29 members, according to Lauren Link, humane education program manager. As the staffer who oversees the group, Link said teens are able to apply their talents and ingenuity through the group.

"Young volunteers have the agency to use their individual skills and voices, execute their creative ideas and advocate for our mission to treat all animals with compassion," Link said, citing the various ways the board works to engage the wider community.

Last October the board brought Fright Fest to life, a COVID-friendly event that yielded an impressive turnout of costumed pets and families.

"It was really big, and it was a lot of fun, too," Gonzales said.

Madison Davis, board secretary and a junior St Ignatius College Prep, enjoys the diversity of the board.

"You really get to interact with a bunch of people from different age groups," she said. "It promotes a sense of community."

All four experienced the monumental move from the humane society's former small brick shelter on Symonds Drive to the new facility on Salt Creek Lane. The board also has been whittled down by dozens in the last couple of years, Wang said, to improve accountability.

"It's made planning events go a lot smoother because you'll know who will show up," Wang commented.

They all share a passion for animals as well as joy in seeing children develop a love for rescuing vulnerable potential pets by volunteering at the humane society's summer camp. Gonzales' four-legged family member even served as a camp therapy dog.

"I got to talk with the kids, get to know them a little bit," she said.

The board meets two Sundays a month. They help recruit and approve new members to make sure their ranks remain solid.

"We all want the same thing, which is essentially for the animals in the shelter to be taken care of," Prado said.

Their aptitude with social media is also an asset. Wang said the junior board even has its own Instagram account to reach the younger set.

Link said she was particularly impressed by the Young Artist Night's success.

"They reached out to hundreds of students in the area to display their animal-themed art," she said. "Thanks to their organizing efforts, we enjoyed a night of community and celebration of young people's artistic talents all in the name of helping homeless animals."

"It's really cool to see all of that come together when we're planing these events," Prado said.

Davis said they want to be faithful stewards.

"I love being able to ensure that future generations are able to experience what we have been able to," she said.