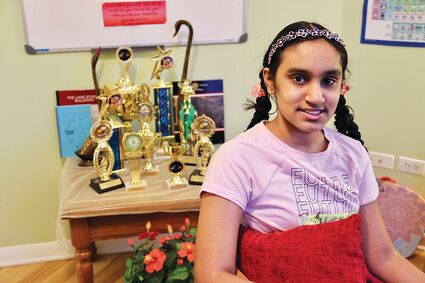 Srinidhi Rao's lifelong love of language began when she was still eating from a high chair. Even as a toddler, she loved spelling words.

Now a fifth grader at The Lane School, Srinidhi will compete in the 2021 Scripps National Spelling Bee - her most prestigious spelling accomplishment to date. Competing with students three grades above her, Srinidhi placed sixth in the South Asian Spelling Bee in Chicago as a kindergartner. She may have placed higher had she not forgotten to repeat her final word after spelling it correctly.

As a second-grader in Pensacola, Fla., she placed ninth in the district bee, again with eighth-graders among her competitors. In third grade, she secured her first championship at her Florida grade school, followed by the Hinsdale Elementary District 181 championship just 10 days after her move to Hinsdale.

In 2019 Srinidhi advanced through the district and county bees to qualify for the Scripps Spelling Bee, ultimately placing 51st out of 562 spellers. With the 2020 Bee canceled due to the pandemic, Srinidhi and her fellow spellers across the country took to their computers for this year's competition. The switch to a virtual competition wasn't without its challenges.

During her last spelling contest, Srinidhi's spelling of a word couldn't be heard by the judges, and although she had spelled it correctly, she had to do another.

She got that word right, too, and ultimately qualified for this year's Scripps Bee by correctly spelling "tomium" at the At-Large Region One Regional Spelling Bee in March. She will now compete for a spot in the finals, to be held in person at Walt Disney World in July.

For this champion speller, spelling isn't just about memorizing letters. Srinidhi studies several languages - namely French, Hindi, Sanskrit, Telugu and Tamil - and uses her knowledge of those languages to find a word's root, decipher its language pattern and ultimately, unveil its proper spelling. Studying languages from India, her family's country of origin, not only hones her spelling prowess, but also helps her embrace her own heritage.

With plenty of help and encouragement from her parents and grandparents, Srinidhi said she is working hard every day to qualify for the nationally televised event.

"My mother keeps telling me that I should not spell without knowing the meanings of the words," she said. So vocabulary also is part of her daily practice routine, some of which is done through Quizlet, an online tool that offers educational games and activities.

Srinidhi will have to make her way through three levels of virtual competition before earning her way to the Magic Kingdom. Only the top 10-12 spellers will travel for the televised final. But qualifying for the final isn't the final goal for this fifth-grader.

"I want to be the youngest first-place winner," Srinidhi said.