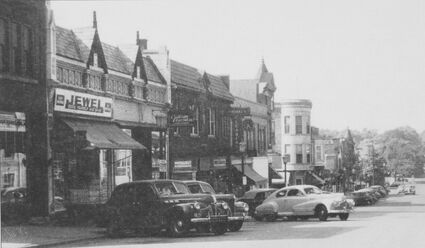 Prime location - From Sandy Williams' book, "Images of America - Hinsdale," we learn the building that currently houses Baldinelli's and Vistro Prime has had food as the main course since the beginning. "Built in 1929 at 114 S. Washington Street to house the Loblaw Groceteria, this later became one of the first Jewel food stores in the chain. Loblaw stores featured a new concept of 'self-serve' rather than clerks gathering orders to be delivered later that day. With customers browsing, selecting their products and carrying them home, costs were significantly reduced, The original groceteria name was derived from cafeteria, a new self-serve restaurant format."