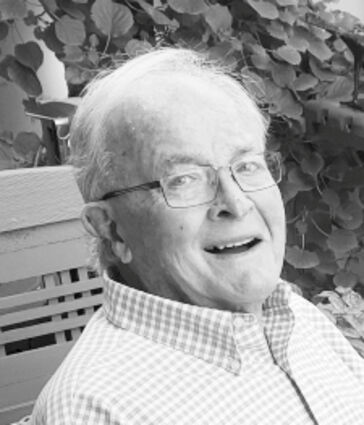 Frank was born in 1931 and spent his childhood on the farm in Oakville, Iowa, the proud son of Frances and Harold Swan. His love of baseball started as a youngster and it led him to play ball at Iowa State University.

After graduating, Frank moved to Chicago and began his 58 years in the meat business. Early in his career, he and his partner, Frank Vaia, started Nationwide Beef on Fulton Street and became a force in the industry. In the following years, he formed companies specializing in both pork and the "best ever" corned beef.

Along with his work, Frank was a passionate golfer, skeet shooter, lifelong White Sox fan and a loyal friend to many. He and Sue Sue loved their many travels, standard poodles, and loyal companion Honeybun.

Frank was president of the Oak Brook Breakfast Club, was a major part in raising money to build Christ Church of Oak Brook, co-chaired the fundraising project to rebuild Union Church of Hinsdale and in 1982 became board chairman of The Community House, where he met the love of his life, Sue Sue. He was a member of Chicago Golf Club and a president of the Hinsdale Golf Club. Frank was also a devoted member of his beloved Friday morning Bible study group.

Frank was preceded in death by his two brothers, Roger and Roy.

He is survived by his wife of 38 years, Sue; her children, Stacy (Chris) Carlstead and Scott Smith; his sister, Colleen Sethrie; his daughters, Sheryl (Charles) Travis and Cynthia Swan; and his grandchildren, Sandy, Jamie, Cooper, Sarah, Elizabeth, Sam, Kit, Annie and Audrey.

A virtual memorial service will be held at 11 a.m. Wednesday, March 10. Please visit https://www.powellfuneraldirectors.com to attend.

Memorials may be made to the Evans Scholar Foundation, 2501 Patriot Blvd., Glenview, IL 60626 or online at https://www.thepromisecampaign.org. Brian Powell Funeral Directors of Hinsdale handled the arrangements.