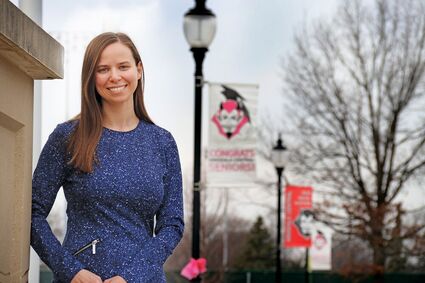 Social studies teacher and literacy interventionist Whitney Wilda has been part of the Hinsdale Central faculty since 2007. (Jim Slonoff photo)

How do you approach teaching women's history?

"It's not just a month for us," said Wilda, who has taught the course at Hinsdale Central High School since it became a graduation requirement in 2016. Wilda said she embeds stories of the contributions of women, past and present, into her lessons all year long.

Civics, Wilda said, is the study of the rights and responsibilities of citizenship. She said the class is helping to make active, educated citizens of today's students - students who will be tomorrow's voters and decision makers.

In examining their own rights and responsibilities as citizens, students learn about how those rights came to be, and how that path continues to vary for certain groups, including women.

"We really try to use the course content in conjunction with current events," Wilda said.

Her classes watched the inauguration of the nation's first female vice president. They talked about the fact that for the first time in history, two women are in direct succession of the presidency, and the growing role of women in the country's legislature.

"Right now we have more women in Congress than we have ever had in this country," Wilda said.

Most recently, Wilda's students discussed the gender policy council recently established by President Joe Biden and its potential impact on rights for all genders.

While students generally have knowledge of women's suffrage, some are surprised to learn of the other rights that women and girls more recently obtained. Title 9, for example - the law that prohibits sex-based discrimination in public education - was passed in 1972. Students learn that their own grandmothers were denied opportunities to play sports simply because they were female.

As part of Women's History Month, students are encouraged to talk to women in their lives about how women's roles and their rights have changed in their lifetimes.

"It's opening up the students to looking beyond the month that is designated," Wilda said, to see how women have impacted history and how history has impacted women.

Wilda's students learn about how far women have come throughout America's history, but also how far they still can go. There are glass ceilings yet to be broken, political offices to be won and CEO positions to be filled, Wilda said.

Throughout the course, students exercise civic engagement by attending local government meetings, writing and even delivering soapbox speeches about causes that matter to them, and writing letters to their lawmakers.

"That is the most important experience," Wilda said.

Wilda said civics is important for the future of the country and the health of its democracy.

"Democracy is fragile," she said, and will continue to survive only if its citizens advocate for their rights and fulfill their responsibilities.