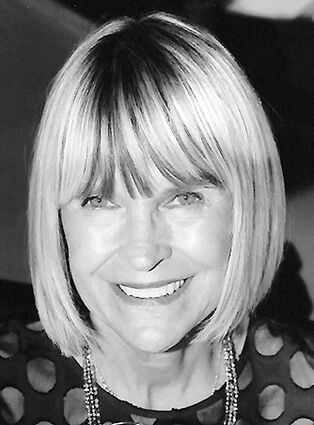 BJ was born in St. Joseph, Mo., in 1943 to Edward and Barbara, nee Morey, Morgan. A graduate of St. Joe Central High School, she put herself through college and became a flight attendant for TWA. She and Norm met on March 16, 1965, on a TWA flight, and were married five months later. BJ's career with TWA spanned many years and took many forms, including at the corporate marketing level.

Later, BJ served on numerous nonprofit organization boards and engaged in countless volunteer charitable activities in the Hinsdale area. Most recently she served on the boards of Family Shelter Service, where the Volunteer of the Year award is named after her, and Hinsdale Humane Society. BJ loved all animals and they loved her. She owned and operated Biondi women's store in Hinsdale.

Her cancer was incurable, but she chose to battle it out with her customary determination and positivity, earning the title "bad ass" from the infusion nurses. Until her illness, she and Norm attended 40 consecutive Community House Christmas Balls. BJ's light shined at the many parties she so loved.

Her passion for exotic travel was unmatched. BJ's and her family's travels took her to every continent. She embraced penguins in Antarctica, fed and bathed elephants in Thailand, swam with sharks in the Galapagos Islands, frolicked with newborn humpbacks in Baja and climbed African mountains to bond with gorillas.

It is not possible to capture all that BJ was on this earth. She brightened every life she touched with her warmth, her beauty, her charm, her wit, her many talents, her elegance and her compassion. She embraced all living things. She was the sun and the moon to her husband and family.

She is survived by her husband of 55 years, Norm; her sons, Derek (Marybeth) and Chad (Katie); and her grandchildren, Savanna, Dante, Madeline and Siena.

In lieu of flowers, memorials may be made to the Hinsdale Humane Society Tuthill Family Pet Rescue & Resource Center 21 Salt Creek Lane, Hinsdale, IL 60521 or online at https://www.hinsdalehumanesociety.org/.

A virtual memorial service will be held at 1 p.m. Saturday, March 13. To attend, please visit https://www.powellfuneraldirectors.com.

A social event celebrating BJ's shining life will be held at a later date.