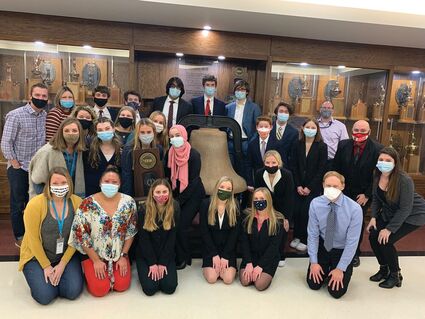 The Hinsdale Central speech team gathers for team photo following the Red Devils' second-place finish in the IHSA state final. State finalists competed at their respective schools via Zoom this year, a format that coach Paul Woods said became more comfortable as year wore on. "We kind of had to adapt as we went through the season," he said. (photo provided)

Hinsdale Central senior and speech team member Sophie Biancalana said the season started out with her filming herself delivering motivational talks in her basement for competitions.

"It was definitely weird to not have audiences," she said of the asynchronous format due to COVID-19 protocols. "It's definitely a lot harder. Usually I feed off the reactions of other people. I kind of just had to imagine what the reaction would be a go off my own energy."

Team members were each in his or her own classroom on Zoom calls with judges and fellow competitors. Even the duet partners were separated. Biancalana said their well-rooted chemistry enabled them rise to the challenge.

"It was hard doing the performance not in the same room as him. I could see him, but it's not the same," she said. "I think it definitely helped that we were so close before."

"The bottom line is you have to find the mentality that makes you do your best," he remarked, saying he wanted to make sure Biancalana had a successful end to her Central speech career.

Senior Hari Rao, who took third place in radio speaking, said the toughest part about the early weeks of the season was not having an opportunity to tweak his performance between progressive rounds because it had to be pre-recorded.

"That was a little bit of a struggle sometimes," he said. "You wouldn't have a chance to alter things if you thought you could do something better."

Once the meets returned to a live format, he found himself regularly reaching the finals. Hari said getting to ring the school bell as a Red Devil team heading to state was not taken for granted this school year.

"We were one of the only activities that had a state meet to go to. It's a really rare opportunity in this climate," he said.

He acknowledged that not having people in the room with him mitigated the stress that normally accompanies the state atmosphere.

"Instead of feeling nervous for my final round, I was trying not to fall asleep," he said.

Senior Noor Mryan captured fourth place in both impromptu speaking and original oratory to cap off her four-year Central career.

"It's definitely rewarding as a senior, and it's going to be memorable for years to come," she said.

Like her cohorts, finding ways to resonate with listeners not in the room took special concentration.

"You had to make your emotions clear with your voice," she said.

"You are given three prompts and you have two minutes to prep a six-minute speech," Mryan said. "That really makes you think quick on you feet and find examples that resonate with all different people."

"Nobody really knew what to expect," he said, adding that he's proud of all involved across the state for working together. "The cool thing was the fact that the speech community in Illinois figured out a way to make this happen."

Other cool things: this was the Red Devils' third top-three finish in a row (champion in 2019, third in 2020) and the program's eighth state trophy in the last 10 years.

"We definitely have some really high-quality performances on our team," Woods said. "The students were ecstatic."

Huber said the team got better as the season wore on, including his own deliveries.

"By the end of the season everyone was kind of used to (the online format)," he said.

He recounted the agonizing wait as state competitors were told the results in ascending order.

Rao said coaches and players were furiously adding up points as categories were announced.

"We were all watching the awards ceremony, and after each event was called, we were tallying it and tallying it," he related.

In the end Wheaton Warrenville South seized the title with 35 points, followed by Central's 32 for second and Hinsdale South right behind with 31 to take third.

Myran's topic for impromptu oratory was the lack of small talk in online exchanges. She said the circumstances of the season also inhibited fellowship with new members of the team, which is normally very close-knit.

"I really tried to make an effort to get to know them," she said.

"(The novices) definitely didn't get to feel that team aspect," she said.

Biancalana intends to get to know them by keeping tabs on the team after she graduates, as those before her have done.

Woods expressed gratitude that the students' got their chance.