Central pool on track to be open in June 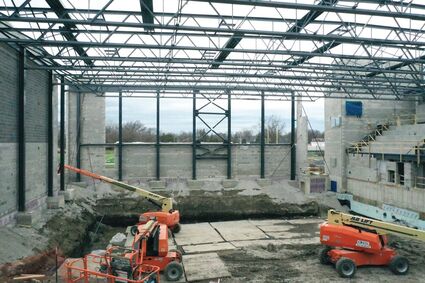 Crews have been working on the Hinsdale Central pool for months but did not have the facility enclosed in time for this month's significant snowfall. The pool was wrapped in a plastic bubble so work could continue, board President Kevin Camden said this week. (photos courtesy of District 86)

Snow and extreme cold are just two of the challenges that have surfaced during construction of the new swimming pool complex at Hinsdale Central High School, but the facility is expected to be completed in June.

"(We) have had some challenges with a couple of different contracts that we worked through and obviously (we're) hampered somewhat by the significant snowfall that has fallen over the last three weeks," Marty Platten of Pepper Construction said at Friday's Hinsdale High School District 86 Facilities and Special Committee meeting. "One of the challenges was the roof installation. We had some issues with some materials. It was all caught and rectified."

Those issues prevented the roof from being installed before the significant snowfall. Workers were able to build an enclosure to allow construction to continue, and they expected to install the roof this week.

"We think with four or five good days of 20s and 30s, we'll be able to get that roof far enough along where it will be able to protect us from the weather," Platten said.

Workers also were getting ready to pour the first concrete slab this week, and progress has been made on the offices, locker room and lobby, he reported.

"It's always a positive sign when you start to see finishes going in," Platten said. "Things are trending well on the locker room side and those mechanical-type spaces. The pool is always going to be the wild card."

After the pool is poured and tile and other finishes are installed, it will be filled and checked for leaks.

The 10-lane pool is the only Phase 1 project that has yet to be completed and makes up the majority of the $23 million in Phase 1 projects at Central. Community members contributed $1.6 million toward the project, which will be named The Don Watson Aquatics Center. Watson, who passed away in November 2017 at age 87, coached the Central varsity boys swim team to 12 consecutive titles. 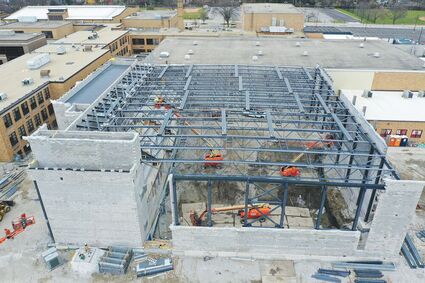 Phase 1 also includes $12 million worth of work at Hinsdale South. The pool addition and renovations there are part of Phase 2 projects, which carry a $49.5 million price tag for both campuses. Bids have been accepted for Phase 2 projects but work has yet to begin.

"We're really positioned well for Phase 2 work and looking for opportunities to start that work where it makes sense," Platten said.

The total project is about $1.7 million under budget at this point, Platten said.

The district will go out to bid this fall for Phase 3 work, which is expected to begin in the spring of 2022.