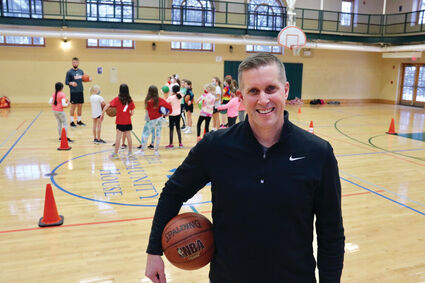 Scott Altemose's search for his family's new home ended when he discovered Robbins Park. Here was a place where his children could kick a ball or swing a bat. And right across the street, at The Community House, was a place where they could learn to do those things and so much more.

The Altemose family, including Scott and Katy's three children - Emma, 9, Luke, 10, and Jack, 13 - made Hinsdale their home in 2015, settling into a house just a few blocks from the park that sparked Scott's affection for the village. They wasted no time before taking advantage of the athletic instruction The Community House has to offer.

Altemose has coached all three of his children as a volunteer with the Jodie Harrison and Jodie Harrison Junior basketball leagues. While the two boys have moved on to play with the Hinsdale Inferno basketball program, Altemose is spending his Friday evenings teaching a group of third-grade girls the fundamentals of the game and preparing them for their

"I'm a huge believer in it," Altemose said of the physical, mental and emotional benefits that can come from playing sports.

While dribbling and shooting are key to playing the game, that's not all that Altemose, and the Jodie Harrison program, intend to teach. Children learn to set goals for themselves, to work toward those goals and to celebrate small victories.

That might be what Altemose loves most about being a coach - witnessing the joy and pride young athletes feel when they perfect the play, make the basket or block the shot.

"It changes something in them," said Altemose, who credits the small victories he enjoyed as a young athlete with shaping the life and career he enjoys today.

"I worked my way up," said Altemose, who is a financial advisor with a large firm in downtown Chicago.

As a father, sports isn't just about helping his children win games and score points. It's about making memories. Every trip to a batting cage or game of catch is helping to build a lifelong bond, he said.

And he believes in the power of sports to change lives. With the Jodie Harrison program in need of a few more parents to serve as coaches, Altemose said it's a job he highly recommends.

"You see another side of your child when you coach them," Altemose said.

And the kids get the chance to see their parents in a different light, as well. It's a chance to learn about each other, he said, while also helping to build community.

Altemose played several sports before turning his attention exclusively to football in high school and college. That's a decision he advises his children against. Rather than focus on a single sport, Altemose said he will continue to encourage his children to enjoy as many sports as they can for as long as they can.

"Sports have been a part of my entire life," he said.