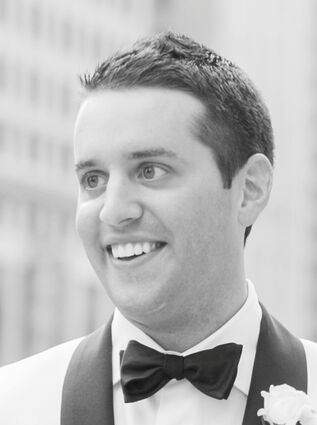 There are two things about Corey that everyone knows to be true: he loved his family and friends and he loved hockey. His two true loves intersected in Lincoln, Neb., when he met his wife-to-be, Ashley, while playing in the USHL for the Lincoln Stars. His hockey career took him to Canada and then to University of Massachusetts, Boston, where he played for the Beacons. Corey's devotion to his first love was most apparent when he chose to walk away from hockey to support his family, shortly after the birth of his first child, Chloe Ann. Thereafter, Corey's focus remained solely on supporting his growing family (though, more often than not, you would probably catch Corey checking his phone for the score of his beloved Chicago Blackhawks - he never missed a game).

Corey was born in 1989 and grew up in Clarendon Hills. His bright, brown eyes and sturdy, strong frame quickly got him nicknamed "The Little Bear," a nomenclature that stuck with him his entire life. He spent his youth following around one of his older brothers, Connor, with whom he shared a love of all things athletic. (His other older brother, Cullen, may have been more available as a playmate had he not been already claimed by sister, Cailley). Corey and Connor were "two of a kind" from the moment Corey could walk. When Corey's younger brother, Chase, came along, Corey took him under his wing, as well. Corey always wanted to win, but not badly enough to beat Baby Chase.

From baseball to golf, tennis to hockey, Corey excelled at almost every sport he touched. He could have done without the academics part of school, but Corey made lifelong friends at every high school he attended, including Fenwick and Hinsdale Central high schools and Culver Military Academy. After attending the University of Massachusetts, Boston, Corey worked at Command Transportation before finding his home at Hub Group, where he started and grew an entire account development team. Hub Group was a place where he excelled professionally and truly loved to work.

On Jan. 24, 2015, Corey married Ashley Arlene Swenson. They soon welcomed Chloe's little brother, Cashton Corey, and little sister, Clarabelle Lynn. They settled into their dream home in Westmont, and Corey's happiest times were spent with his wife and children enjoying that home. He loved spending time with friends and family, watching "Top Gun" and the Chicago Blackhawks on his (absurdly) big screen TV and ground-shaking sound system. Some of Corey's favorite memories included summer days at Dewey Lake and playing rounds of golf with his father, brothers, wife and daughter.

Corey was a great leader and friend. He was known for his infectious smile, compassionate spirit and unwavering loyalty. More than anything, Corey had a big heart, with nothing but love for everyone. Chloe, Cashton, and Clarabelle now have a very special guardian angel who will watch over them every day of their lives.

Corey is survived by his wife, Ashley; his three children, Chloe, Cashton and Clarabelle; his parents, Tobin and Laura Chakeen; his three brothers, Cullen, Connor and Chase; his sister, Cailley (Drew) Tonn; his nephews, Harrison and Brooks; and many aunts, uncles, and cousins.

Share memories and photos on the tribute page at https://www.sullivanfuneralhomehinsdale.com.

In lieu of flowers, memorials may be made online to the American Liver Foundation at https://liverfoundation.org/for-patients/donate-now/ or to support Corey's wife and children at https://gofund.me/816f6249.