Trivia Night set to be a virtual success 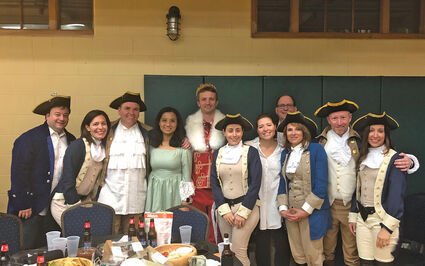 Hinsdale Historical Society board member Joanna Gatzulis (second from left) and her team enjoyed dressing up in a "Hamilton" theme for last year's Trivia Night. Liz Oliviero (far right) and her team won first place two years ago for their "Women Through History" costumes. This year's virtual event is Saturday, Jan. 30, and registration continues through 9 a.m. the day of the event. For more information, turn to Page 30. (photos provided)

At the first Trivia Night the Hinsdale Historical Society hosted five years ago, about 80 people filled Immanuel Hall to take part in the event.

"Last year we had close to 200 people," said Joanna Gatzulis, noting the event outgrew Immanuel Hall and was moved to The Community House two years ago.

What might this year's attendance be? It's hard to predict, with no constraints on room size as the event goes virtual.

"The numbers could be unlimited," said Gatzulis, who is co-chairing this year's event with Denise Marron. "Hopefully we can generate enough interest out there."

The online version of the event will feel very similar to Trivia Nights of previous years.

"We have the same trivia master that we've worked with in the past. Since the pandemic hit, he has done many of these trivia (events) online, with teams doing a remote format," Gatzulis said.

Team members can gather in person or participate remotely themselves, she explained. The trivia master will set up breakout rooms for teams to discuss their answers privately before making a public guess.

"Really what we like about the remote setup is that it's unlimited as far as where your participants are coming from," Gatzulis said. "If you have a friend that doesn't necessarily live in Hinsdale or lives in the Chicago area, they can join the event as well. We thought that was a really interesting aspect of going completely remote. Some people have family members that are across the country as well."

People can sign up as individuals or on teams of up to 10. Because no alcohol will be served at the event, people younger than 21 can participate this year.

The questions primarily will focus on general trivia, with a few exceptions.

Teams once again will be encouraged to choose a historical theme and come in costume. Attendee Liz Oliviero and her team have chosen "2020" as their theme.

"I'm rolling myself in a roll of toilet paper," Oliviero said. "We have some super funny ideas for this year."

Two years ago her team won the best costume award for its "Women through History" theme.

Oliviero dressed as Cleopatra, with other team members donning the personas of Ruth Bater Ginsburg, Coco Chanel, Jane Goodall and Jane Fonda, to name a few.

Oliviero said she first got involved in the historical society while living in a historic home when she first moved to Hinsdale. She sees value in preserving the town's history, especially for her four children, a 12-year-old daughter and three sons ages 9, 8 and 7.

"Since my kids are being raised in Hinsdale, I really would like them to still have the (Hinsdale History) Museum for them to go to on school field trips. The Zook Home at KLM needs a lot of work and a lot of help."

This year's Trivia Night is an important fundraiser, as last year's Kitchen Walk had to be canceled, noted Oliviero, who was slated to co-chair that event.

"That is a huge fundraising effort that makes so much money for the historical society and we didn't have that. This year we're not going to be able to do it traditionally how we had it," she said.

Gatzulis and Oliviero encourage participants to take advantage of one or both of the restaurant packages being offered in conjunction with the event. 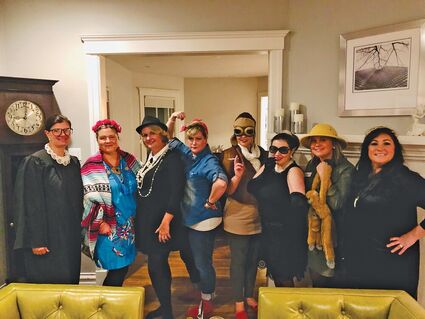 Altamura and Cooper's Hawk are offering a charcuterie tray and bottle of wine, and Vistro has put together a special menu for the event.

"It's actually a menu and drinks that is exclusive to the event that looks delicious to me," Gatzulis said.

Food orders must be placed by Jan. 27.

The two also encouraged people to register even if they don't have a team of 10 and/or aren't interested in wearing a costume.

"There's not as much planning that's needed," she said. "Rather than sitting home on a Saturday night, this is something fun you can jump online and do with friends."

The cost is $20 a person. For registration information, turn to Page 30.