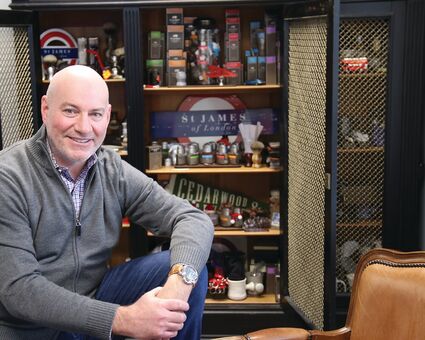 Todd Fisher, owner of British cologne company St. James of London, has taken the firm from a defunct brand in 2013 to having a presence in 24 countries today through retail and business-to-business merchandising. The Decatur native said he enjoys his London visits. "It's the one city I could easily live in - if wasn't so expensive," he said. (Jim Slonoff photo)

Resurrecting British men's fragrance firm St. James of London in 2013 made Hinsdale's Todd Fisher feel at times like he was channeling the protagonist in Mark Twain's "A Connecticut Yankee in King Arthur's Court."

"When I was doing the largest fragrance trade show in Italy, brands are located in different pavilion buildings based on origin," Fisher said. "I could have chosen to be in either the U.S. or UK pavilion, but I always choose UK due to our brand origins and also the fact we manufacture our products there. It was during this time when other British brand counterparts took notice of 'the Yank.' "

An outsider no longer, Fisher has gotten St. James back inside the retail mix for the first time since it ceased operations in 1963. His attraction to the endeavor was two-fold: attaining his lifelong desire to own a company by age 50 (he's now 54) and St. James' legacy of using only natural ingredients in its formula.

"People historically have not realized that whatever you put on your skin is absorbed into your body. So it's no different than food," Fisher stressed.

Leveraging his background marketing sporting goods, he refreshed the logo to marry the company's heritage with a contemporary vibe and, working with a London factory, expanded the number of fragrances from one to 11.

"What men will remember is color. So part of the packaging DNA is a colored ribbon at the top," he explained, enabling clients to identify "Sandalwood & Bergamot," for example, as "the red one."

In addition to cologne, the firm sells body wash, shaving cream and hand-tied brushes. Oh, and if a razor is needed just grab a handmade "Cheeky B'stard."

"I didn't want the brand to be too serious. I wanted it to be playful," Fisher said.

A wine lover, he said discerning new cologne scents is akin to employing a sommelier's palate.

"You have your top notes, your middle notes and your bass notes, i.e. your finish," he commented.

The absence of alcohol in their formula results in a softer aroma profile, Fisher said.

Women took notice and became a significant component of their clientele.

"A lot of women gravitate to the men's because they don't want to smell too girly, but we're not over-the-top masculine either," he said.

Taking the hint, the company rolled out its perfume line a year and a half ago.

While the pandemic put the brakes on sales of razors and shaving cream as people worked from home, Fisher couldn't keep cologne and body wash in stock.

"I guess the good news is people were still bathing," he quipped.

St. James of London got a big publicity boost right before Father's Day last year with a national shoutout on NBC's "The Today Show."

"And we were on again for Christmas, because the success was so good," Fisher said. "It's great exposure for us."

The father of two is thankful he doesn't travel as much as in previous roles. But he still feels divided.

"Even though I'm in Hinsdale, my mind is always in the UK."