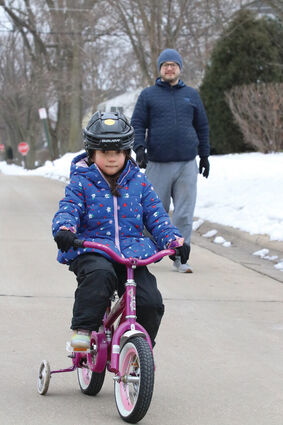 Bike tyke - Emma Gorden and her dad, Reed, took to the quiet streets in the village Sunday to get some fresh air and exercise. January's mild temperatures seem to be holding on through this week and into next week as well. According to the Farmers' Almanac, the area is slated for a cold winter with normal to below-normal temperatures. Reports indicate the polar vortex is likely to split later this week, which could mean colder temperatures and snow for the Chicago area. (Jim Slonoff photo)