Teacher vaccinations, saliva testing among steps needed to bring back all D181 students 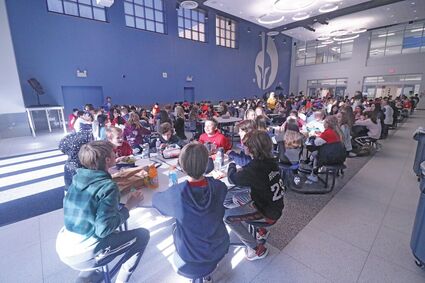 Saliva tests likely will bring D181 schools one step closer to reopening fully. One concern is that students will not be socially distanced or masked during lunch. (file photo)

Although Superintendent Hector Garcia was hesitant to commit to a date for fully re-opening schools, some board members in Community Consolidated District 181 are eying March 1 as a target date.

"I always hate to put down a certain date, but that would be the best-case scenario," Garcia said at Monday's board meeting

As part of the path to fully reopen schools, staff members would need to be vaccinated. Gov. JB Pritzker has said teachers will be among the next group of individuals to receive vaccinations in phase 1b, which includes front-line essential workers and those 65 and older.

"We're hoping to move into that phase 1b in February. It looks like it's on track," Garcia said.

Vaccinating all 268,000 Illinoisans who will be eligible in 1b will be a challenge, he noted. He sought the board's input on whether the district is ready to implement saliva testing as well, which would enhance the current safety protocols of masking, social distancing and hand washing.

"We know it's multiple layers of safety that is going to help us not only stay open but to that full re-opening path," Garcia said.

The district has been looking at weekly saliva tests for 3,000 individuals at a cost of $20 or less per tests. District leaders have yet to send a survey to parents to determine who would participate.

"We're hoping that that percentage is in the 80s, 90s," he said. "The higher the percentage, the more effective this measure will be."

Administrators have been looking closely at two testing options, one from Safeguard Surveillance LLC and one from the University of Illinois, which is still being developed.

The U of I test costs $20 and would be processed at a CLIA-certified (Clinical Laboratory Improvement Amendments) lab. It is anticipated to be ready on Feb. 1, with the first possible day of testing on Feb. 9.

The Safeguard test, which currently is being used in other Chicago-area districts, costs $11 and could be available in about two weeks. Safeguard is not a CLIA-certified lab, but the district can use the test for screening, as long as flagged individuals are then sent to get a diagnostic test from a certified lab, the district's attorney stated.

The Safeguard collection process would take place at home and students would drop off their samples at school. The collection process for the U of I test might require supervision by a health professional, Garcia told board members.

Board member Meeta Patel, a physical medicine and rehabilitation specialist, said the saliva screening would be useful.

"The level of testing that is currently being done across the United States is mostly for symptomatic individuals and some asymptomatic individuals," she said. "There is some additional information that shows if we were able to screen early and often, we may capture students and staff in our buildings before they become symptomatic."

The tests do add up to a substantial cost over time, Garcia said, ranging from $500,000 to $900,000, depending on how many people are tested and how long tests are administered.

Board member Nate Lucht said he supports the expense as long as it is part of a strategy to fully re-open schools.

"For me, I'm all for it. The number keeps going down every week we wait - the number meaning the cost. From my perspective, as long as it's part of opening the schools, let's go."

Board member Bill Cotter said testing is worth the investment only if schools fully reopen and students are unable to remain 6 feet apart and masked during lunch.

"That makes a ton of sense to me and I would be in favor of moving forward with that aggressively," he said.

Based on the board's consensus, Garcia said he will begin contract talks with Safeguard and bring the matter back to the Jan. 25 board meeting. His team also will begin work on a participation survey. He cautioned the board against looking out beyond two to four weeks.

"We know how almost impossible that is to do," he said. "If things are looking better or worse, I will be candid with you and the community. If things can be done faster, I will share that information."

Lisa Pomeroy, parent of a fifth-grader at Elm School and an eighth-grader at Hinsdale Middle School, told board members during public comment that they need a plan to return to full-time in-person instruction this year.

"School is essential," she said. "The half education our students are receiving in the current hybrid model is keeping them behind their peers at schools like Gower, Butler, private and parochial schools.

"I ask you to do your job and open the schools full time," she added. "Put the kids first."