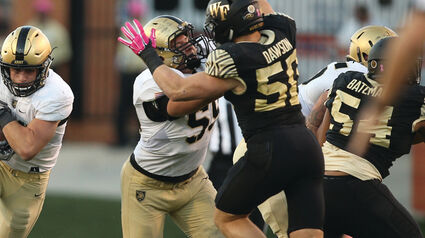 Hinsdale native and Army football player Mike Johnson blocks a Wake Forest defender during a game. As team co-captain this season, Johnson led the team to its third Commander-in-Chief's Trophy in four years. "That was probably the biggest deal by far. No other team or individual accolade really matters. That's the big one," he said of primacy among the service academies. (photo courtesy of Army Black Knights)

Mike Johnson's final campaign as a member of the Army football program was cloaked in uncertainty when training camp began last June.

How many games would the pandemic allow? Would there even be a season?

The season not only went on, but it produced a legion of memorable exploits for both the Black Knights and their starting left guard.

"We just had a kind of mindset that we were going to prepare and plan, do our workouts and if ever anything were going to come up, we were just going to go forward," Johnson said.

The squad was ready to turn the page after what many regarded as a sub-par 2019 season,

"Everyone was kind of hungry and had a chip on their shoulders," he said. "We were ready to put the program in the right direction."

In August, Johnson was elected one of three team captains.

"It was probably the biggest honor of my life," he said. "That's something I'm super proud of and humbled by. It kind of brought about a greater sense of responsibility for the team."

Two blowout home wins to open the schedule would set the tone for an eventual 8-0 record at Michie Stadium, the most wins there in one season in the venue's nearly 100-year history. The Knights were 6-2 heading into a Nov. 21 game against Georgia Southern. Down 21-7 at halftime after several miscues, Johnson said the team was able to flip the script in the second half, pulling out a 28-27 comeback victory.

The team knew it would need that kind of resilience in its final two regular season match-ups versus service academy foes Navy and Air Force, with the coveted Commander-in-Chief's Trophy on the line.

The Army-Navy Game had about 15,000 fans in attendance to see the 2020 edition of the storied rivalry. It was biggest COVID-restricted crowd Johnson and his teammates had competed in front of. A live broadcast of ESPN's College Gameday program from the West Point campus added to the buzz. The trappings of normalcy was energizing, Johnson said.

"They brought in both student bodies and they were able to spread them out and have the aesthetics and decorations they normally do. That was probably the best atmosphere the whole year," he said.

Army triumphed 15-10, needing a win against Air Force to bring home the trophy for the top service academy. But it wouldn't be easy in the defense-dominated affair.

"The last drive against Air Force, we were able to come together at the point that it mattered most," Johnson said of the 16-play, 80-yard fourth-quarter scoring drive that gave the Knights a 10-7 victory. "It was probably the biggest one this year."

It also marked the 35th win for Johnson's class of 2021, the most of any class in Army history. And thanks in large part to Johnson and his fellow offensive linemen, the Knights were one of only two teams in the country to rush for more than 3,000 yards during the season. Johnson, for his part, led the team with 150 knockdown blocks, a physical display that earned him an All-America honorable mention nod from Pro Football Focus.

"It's definitely different," he said. "Before the attack, it's more violent, more physical than any of the offenses I ran in high school."

There was one episode of hard contact Johnson probably would rethink - head-butting his coach in celebration while still wearing his helmet, video footage of which went viral.

Playing in front of mostly empty stands was strange, he admitted, but didn't phase him.

"When I'm on the field actually playing, I almost have tunnel vision and I don't pay attention to anything else," Johnson related.

He said the players' special camaraderie - they call it "the brotherhood" - is forged by a shared commitment to both the sport and their military call.

"That just puts us in a unique position, what we go through on a daily basis: the army, the country, each other. It's a far greater kind of bond," Johnson said. "We take a lot of pride in that."

The team's 9-2 record got them a bid to the Independence Bowl on Dec. 26. Until no one would agree to face them.

Fortunately, West Virginia also needed a playing partner in the Liberty Bowl on New Year's Eve, and the teams got to close out the year together. The Knights fell 21-24 in a hard-fought contest, but Johnson said that disappointment paled in comparison to the finality of the brotherhood's run.

"The hardest part of that game was knowing it was the last time playing with those guys," he remarked.

Next up for Johnson is the Infantry Officer Basic Leadership Course at Fort Benning, Ga. Like the perseverance needed to end the pandemic, he said he's learned the importance of sticking to a winding but winning process.

"I've taken my former short-term mindset and turned it into a long-term mindset, trying to excel at one thing at a time while keeping my focus on the long-term goals," Johnson said.

The Hinsdale Central alum added that he's looking forward to following his alma mater during their deferred spring season.