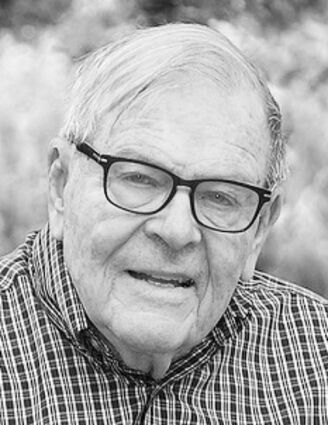 Chad was a resident of Hinsdale for 62 years, before moving with his wife Jackie to King Bruwaert House in 2016. Chad had deep roots in Hinsdale, with both of his parents having been raised in the village. Chad was the great, great grandson of J.H. Papenhausen, an early resident of Hinsdale who immigrated from Germany in 1876.

Born in 1926, Chad was raised in Des Moines, Iowa, where he graduated from Roosevelt High School in 1944. He was inducted into the Army upon graduation and served in an artillery battalion with the 71st Infantry Division, seeing combat in Germany and Austria in 1945. After a year of occupation duty in Austria, he returned to the United States in 1946.

After briefly attending Drake University in Des Moines, Chad relocated in 1949 to Paris, France, where he used his GI Bill money to attend the Académie Julian art school. He returned to the U.S. in 1952, settled in Chicago and began a long and illustrious career in advertising design.

In 1953, Chad Jefferson & Associates was formed. It operated for more than 50 years and helped produce pioneering direct response advertising for innumerable clients, including notables such as Encyclopaedia Britannica, Hewlett Packard and Texas Instruments. Chad's work with renowned Chicago ad agencies Stone & Adler and Kobs & Draft won awards, recognition and profits for those agencies, their clients and Chad Jefferson Associates. Chad was perhaps most proud of his award-winning work for Texas Instruments, including their 1972 launch of the TI-2500, the world's first hand-held calculator. He was also very happy to have been instrumental in the 1970 introduction of Encyclopaedia Britannica's Young Children's Encyclopedia, which Britannica published, through multiple editions, for almost 20 years.

Soon after arriving in Chicago, Chad met Jacquelyn Fishbaugh of Shenandoah, Iowa. They married in 1954, and shortly thereafter moved to Hinsdale, where they raised four children. Chad was an avid golfer and tennis player, and he and Jackie were charter members of Hinsdale's Salt Creek Club. After his retirement, Chad volunteered at Chicago's Newberry Library, lending his expertise to the task of cataloging and prioritizing their large collection of American advertising and commercial art. Also post-retirement, Chad channeled his life-long love of dogs into years of dedicated volunteer work at the Hinsdale Humane Society.

Chad and Jackie were both genuine nature lovers and had a beloved summer cottage on the Lake Michigan shore in Cedar Grove, Wis., where they spent 32 wonderful years with their children and dogs, grandchildren and friends.

Services and interment are private.

Please support the Jefferson Family by signing the online guestbook and sharing a memory at https://www.sullivanfuneralhomehinsdale.com.